The SEAT Leon has been updated for 2017, and we test it in 2.0 TDI guise to see if it can live with the new breed of hatchback rivals 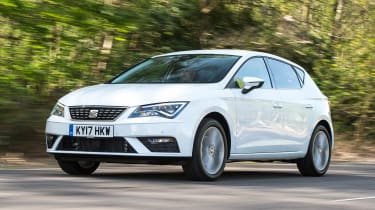 Despite SUVs accounting for more and more family car sales, the SEAT Leon remains a competitive and compelling choice for those in the market for a practical and efficient hatchback. A Vauxhall Astra offers superior value for money and is better to drive, while the VW Golf on which the Leon is based is more grown up and even better built. Our high-end XCELLENCE seems a little flashy, but opt for the cheaper SE Technology and the stylish SEAT is hard to ignore.

SEAT’s product portfolio is changing. Once famed for its high-value hatchbacks, the Spanish manufacturer is investing big in fashionable SUVs – with the new Ateca already selling well and an Ibiza-based Arona crossover due very soon. A larger model called Formentor is in the pipline, too.

But SEAT refuses to hide its heritage – and this updated Leon is as important now as the pre-facelift car was when it launched in 2012. Based on the recently updated Volkswagen Golf, it uses an identical range of engines and is mated to the same tried and tested MQB chassis. 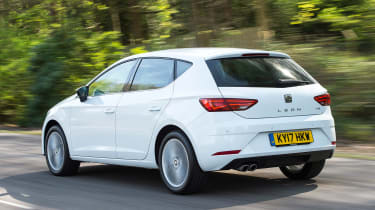 We first drove the new Leon late last year in 1.0-litre three-cylinder turbo guise. Now we’re trying the faster 2.0 TDI, which as before is available in a choice of power outputs. It’s the cheaper 148bhp car we try here in the UK, paired with SEAT’s excellent six-speed manual gearbox.

Visually, the changes are subtle. Even a keen eye might fail to spot the car’s new front bumper, updated grille and fresh alloy wheel designs. Many pre-facelift cars came with full-LED lights, so the designers have left those well alone meaning the revised Leon maintains the old car’s youthful, high-tech appeal.

Inside, all but the entry level S model get an eight-inch colour touchscreen, with USB connectivity, DAB radio and even sat-nav. In all honesty, SE Technology come so well equipped that few buyers will feel the need to upgrade to our XCELLENCE trim, but those that do will gain Apple CarPlay and Android Auto, wireless phone charging, dual-zone climate control and auto lights and wipers. A sportier FR spec is also available, alongside the flagship Cupra hot hatch. 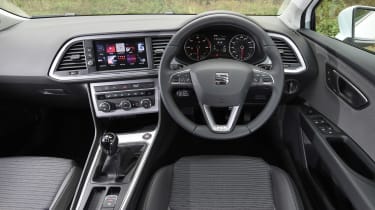 Quality is good, if a little off its Golf sibling for its top-notch fit and finish. On the whole, however, the Leon feels suitably upmarket and logically designed, if a little unexciting to the eye. Many of the shortcut buttons have been removed from the central screen, which can prove frustrating when you want to jump from radio to nav, but it’s not as fiddly as VW’s gesture controlled setup.

The 1.6 TDI will remain the top-choice for high mileage motorists, but the new 1.0-litre TSI we tried last year proved a great fit for SEAT’s Ford Focus rival – offering low emissions and decent fuel economy. This punchy 2.0-litre TDI offers a brilliant compromise for those refusing to sacrifice performance for reduced running costs – hitting 62mph in 8.4 seconds yet also returning 64.2mpg. Emitting only 112g/km of CO2 means it’s only one Benefit in Kind tax band worse off than the smaller 1.6 diesel.

It’s pleasantly quick, too. Packing a hefty 320Nm of torque ensures the Leon gains speed reliably and efficiently, making light work of motorway driving and quick overtakes. Stay above 1,500rpm and the TDI picks up with serious gusto, and unlike many diesels it feels happy to rev, too. 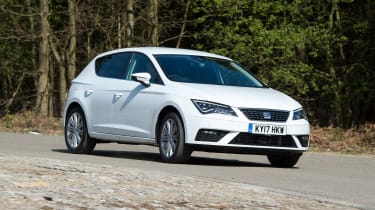 However, while the Leon was praised in 2012 for its sharp handling and responsive steering, both the Vauxhall Astra and new Honda Civic now have the measure of it when it comes to driver fun. Everything feels well weighted, but there’s more unwanted roll in the SEAT than you’ll find in either of these two rivals. It just feels a bit too soft.

At high speeds you’ll find a Golf slightly quieter, but extra sound insulation has allowed the SEAT to take a step up when it comes to refinement. The familiar 2.0 TDI is a bit gruff around town but it settles down nicely at a cruise. Our car’s 17-inch wheels kicked up very little tyre roar either.

Cabin practicality is unchanged, with the same three body styles and roomy boot. Those regularly using the back seats will be better suited to the five-door hatch or ST estate, though three-door SC buyers sacrifice nothing when it comes to seats-up boot capacity. Both the three and five-door get a 380-litre load bay, though the five-door pips the SC by 60 litres (1,210 litres) with the rear bench folded flat.