This is the Skoda Vision X, a Geneva Motor Show concept that previews a new small crossover from the Czech brand, similar in style to the SEAT Arona and VW T-Roc.

The Vision X - which is expected to reach production in 2019 and could carry the badge Amiq or Anuq - is more of a crossover than an SUV. It’s 4,250mm long and 1,800mm wide - longer and wider than both of its ‘sister’ VW Group cars, the T-Roc and Arona. But the Skoda’s roofline is also significantly lower than both of those vehicles'.

Significantly, the Vision X’s wheelbase is 2,645mm - 55mm up on a T-Roc’s and a full 80mm longer than an Arona’s - because Skoda wants its smallest SUV to deliver family car practicality that’s still a relative rarity in this style-focused class. To achieve this, it’s basing the production car not on the supermini-length iteration of the VW Group's MQB A0 platform, but instead on the longer version that will also be used in the next generation of Rapid. 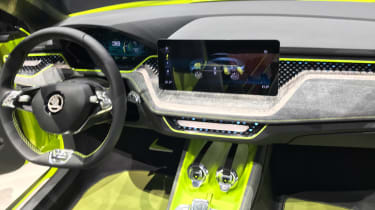 That longer wheelbase is clearly evident in the design, which features Skoda's distinctive 'kick' around the C-pillars. The front mixes up the firm's current SUV design language by placing the daytime running lights (which also deliver animated indicator signals) sitting above the larger headlights below.

The cabin is being kept under wraps for now, but we know from sketches that it will feature a 'floating' widescreen infotainment system.

The Vision X has a 1.5-litre petrol engine that’s engineered to run on CNG. But the concept also features cutting-edge 48-volt mild-hybrid powertrains at both ends - a modest starter-generator that offers a boost to the engine, and a more potent 27bhp/70Nm electric motor at the rear axle that can either drive the car short distances on pure-electric power, or join forces with the combustion engine to deliver four-wheel drive.

The back motor can also be disconnected completely, allowing the car to run as front-wheel drive and only intervening to recuperate energy when coasting down hill or under braking. This electricity is then fed back into a battery pack, mounted below the front seats, that powers both the front and rear motors.

Skoda claims that the Vision X can manage 0-62mph in 9.3 seconds and a top speed of 124mph, while delivering CO2 emissions of 89g/km - comparatively low for a four-wheel-drive SUV. Assuming the small petrol tank is used as a reserve, a Vision X-sized vehicle equipped with the powertrain would have a range of around 370 miles, Skoda says. 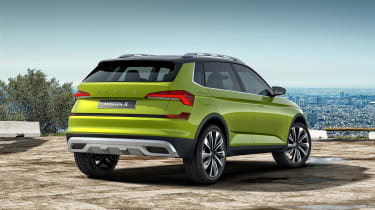 Skoda’s board member with responsibility for technical development, Christian Strube, declined to name a date when the mild-hybrid systems could be offered on a production car like the Vision X, but he admitted, “We are pushing for it. This is a very good way of delivering four-wheel drive on a car of this size because it works well for packaging."

Skoda believes CNG has a significant future through e-fuels - where renewable energy is used to mix hydrogen with CO2 harnessed from the atmosphere to produce methane, or synthetic petrol or diesel. The firm’s powertrain chief, Martin Hrdlicka, has calculated that ’cradle-to-grave’ CO2 emissions for a 1.0-litre 114bhp petrol vehicle could be cut by almost two thirds if the car in question used e-fuels throughout its life. And the tech could bring immediate benefits for existing cars, too.

The powertrain is viable from 2020, according to Skoda, with the entire range likely to get a gas solution.

For all the latest in the build-up to the 2018 Geneva Motor Show, click here...

Welcome to our Geneva Motor Show hub page, scroll down for all our Geneva content...
Visit SEAT and Skoda dealers give virtual tours of cars from their driveways