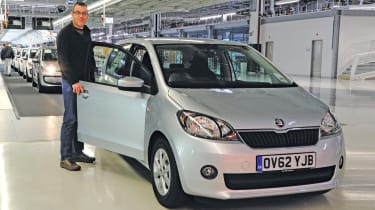 The Skoda Citigo is joining our fleet, and as it’s the reigning Auto Express Car of the Year, we thought we’d go the extra mile and collect our model from the factory in Slovakia. We’d heard the vast, hi-tech facility was well worth a visit anyway.

It’s located just a few miles outside the capital, Bratislava, and produces the Citigo and its SEAT Mii and VW up! sister cars. Plus, a separate line on the same site assembles the VW Touareg and Audi Q7, as well as the body of the Porsche Cayenne – that’s cars from five Volkswagen Group brands being produced in one place, which is some achievement.

This is all possible because of the 2.1billion Euros VW has invested since 1991 to turn the facility into an ultra-modern assembly plant. The sprawling site covers 1.2 square miles and employs 7,600 people, producing around 400,000 cars a year. As you’d expect, it’s all spotlessly clean, and this is the only factory in the world to feature its own cable car – it’s used to take finished vehicles from the production line to the test track. This must be one of the busiest cable cars in the world, as plant spokesperson Vladimir Machalik told us the near-one-mile-long Citigo, Mii and up! line now produces 1,000 cars a day.

We start our tour in the body assembly hall, where 430 robots turn 285 pressed steel components into a completed shell. From here, we lose sight of the cars as they head through an overhead bridge to the paint shop.

They re-emerge in the final assembly hall, where they meet the pre-assembled engine, gearbox, fuel tank and suspension. Then, interiors, bumpers, lights and trim are added to the shells, and it’s here that the subtle differences between the Skoda, SEAT and VW are highlighted.

A staggering 2,500 components are added through this final assembly process, before the cars head past final checks to the on-site rail yard for transportation. But there will be no relaxing train journey to the UK for our gleaming silver Citigo Elegance GreenTech. Instead, we’re going to drive it to Blighty – and according to an online route planner, that means we’ll be racking up the best part of 1,000 miles.

We’ll tell you all about this marathon trip in a future report, and it’s a journey we’re looking forward to, as the Citigo has blown us away with its motorway refinement whenever we’ve driven one in the past.

Plus, we’ve specified the £100 Convenience pack, which brings cruise control, while the standard navigation system in the Skoda includes European mapping and Bluetooth. Heated seats feature, which will be another bonus in the cold weather, and we’ve had a set of Continental winter tyres fitted.

Nothing beats collecting a car from the factory, and seeing the plant in action adds to the sense of occasion. Yet if the Citigo lives up to its billing, the journey home could be the best bit. Read all about it in our next update.

“Personally, I would choose the Citigo over any other city car. It looks good, drives well and knocks spots off the competition in terms of space and quality.”coolcat, via www.autoexpress.co.uk