The Skoda Citigo Sport is a welcome addition to the maker's city car line-up, with more kit and style 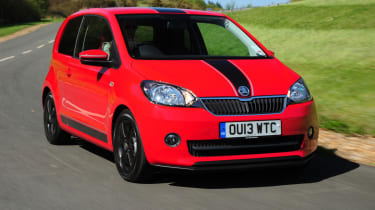 The Sport is a welcome addition to the Skoda Citigo line-up, but buyers expecting a hot hatch version of the city car will be disappointed – it’s a sheep in wolf’s clothing. Still, we like the fact there’s a lot of added style for not too much extra cash, and it’s just as great to drive as always – both in town and on the motorway.

The Skoda Citigo is our reigning Car of the Year, but it was never designed to get your pulse racing. Now there’s a sporty version that, while hardly a hot hatch, gives the car added youth appeal.

The Citigo Sport is based on the SE and features firmed-up suspension, stripes on the bodywork and 15-inch gloss-black alloys. There’s also a front spoiler, rear diffuser and wing.

Despite the car’s pumped-up appearance, the engine is the same 59bhp 1.0-litre three-cylinder as is used in the SE.

It means you’re unlikely to win any drag races, but unless you’re going up a steep hill, the 95Nm of torque is enough to keep momentum up.

The five-speed manual box has a snappy action, while the steering is direct and well weighted. You can feel the suspension changes, which keep the body flatter in bends, but it’s not uncomfortable, even over small potholes.

Inside are red and black cloth seats, with leather on the three-spoke wheel, handbrake and gearstick gaiter. Red stitching adds to the sporty flavour. The two-tone grey and black dash features a standard five-inch touchscreen, which controls sat-nav, Bluetooth connectivity and the car’s trip computer.

The steering wheel adjusts only for rake, not reach, but the seat slides forwards and can be raised if you’re shorter than average, too. Even with a tall driver, though, there’s enough space in the back for two adults.

Trouble is, the Sport costs £1,600 more than the SE, which is a substantial amount at this price point, even considering the styling and suspension tweaks. And if you want more practicality, the five-door is £350 extra.