The Kodiaq is capable of over 47mpg, making it one of the more frugal seven-seat SUVs. Insurance costs are impressively low, too

The Skoda Kodiaq isn’t just one of the cheapest seven-seaters to buy, it should also prove to be one of the most cost effective to run. Flagship variants are thirstier and can get expensive, but even these offer a good level of economy for a car of this size and weight.

The most efficient engine choice is the 2.0-litre 148bhp diesel in conjunction with front wheel drive and a DSG automatic: in SE trim and with seven seats fitted average fuel consumption is 42.2 to 47.1mpg, while CO2 emissions sit at 133g/km.

Note that these figures will worsen slightly as you make your way up through the trim range, as weight and wheel size increase. Adding four-wheel drive also affects economy and emissions, but opting for a manual gearbox here can lessen the blow for the former if not the latter.

On the petrol front it’s best to opt for a manual gearbox if you want the best-possible economy and emissions – an SE L seven-seater with the entry 1.5-litre unit will return 35.3 to 37.7mpg and emit 133g/km.

At the top of the range, meanwhile, the sporty Kodiaq vRS returns 34.0 to 35.3mpg and emits 164g/km. Considering the extra performance on tap over other diesels in the range, these figures aren’t entirely unacceptable. 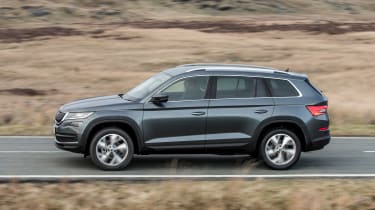 Insurance groups for the Kodiaq make it look considerably cheaper than the competition. The base 1.5-litre petrols start from group 15 – the same as the most basic Nissan X-Trail models. Even the top-spec 2.0 TDI 190 slips in at group 25. That should mean decent savings, particularly for younger buyers. The vRS sits in group 29.

Residual values for the Kodiaq are reasonable and on a par with similar SUVs, but aren't particularly spectacular. Expect values in the 43-55 per cent range after three years of ownership, with the diesel SE L models offering the best value and the 1.5 TSI petrols trailing at the back of the pack.