As spacious and versatile as the class best, with a huge boot and a choice of five or seven seats

This is the area the Skoda Kodiaq has to excel at to succeed and, thankfully, it largely does. It’s not oversized on the road, yet it offers excellent levels of space for most passengers and a class-leading boot.

Alongside the space on offer, visibility is very good. Skoda has resisted the urge to give the Kodiaq a coupe-like rear end (that looks set to come later with a Kodiaq-based coupe SUV). Instead, the boxier design allows for a decent view out front, while every model comes with either parking sensors or a reversing camera so manoeuvring into spaces isn’t too hard for a car of this size. 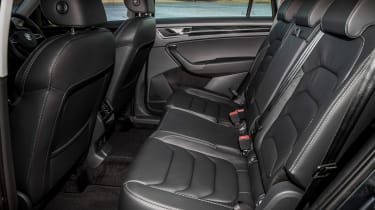 Storage is also excellent in the Kodiaq. The front passenger has access to a centre console bin, phone storage, a number of cupholders, plus two gloveboxes – a conventional one and a second with a flip-up lid behind the wood-style dashboard panel. Rear passengers also have neat tray tables with built in cupholders and lights.

This being a Skoda, there’s also a number of neat ‘Simply Clever’ touches dotted about the cabin. Top-spec cars get a powered tailgate as standard, but Skoda has really thought about the detail with the Kodiaq. Umbrellas in the front doors, an ice scraper in the fuel filler flap and useful underfloor storage in the boot are some of the smart additions. These little features won't make or break a purchase, but they’ll come in useful and make everyday life with the car simpler.

The Kodiaq is exactly 4.7m long, while it’s 1,882mm wide and 1,680mm tall. Those figures are just a few millimetres longer, wider and shorter than the Hyundai Santa Fe, but the Kodiaq’s wheelbase is a considerable 91mm longer. That means more passenger space, but with very little effect on manoeuvrability. Surprisingly, though, the Kodiaq is around 160mm shorter than the Superb.

This wouldn’t be a Skoda if it wasn’t spacious. The Kodiaq has tonnes of occupant space up front, while headroom is impressive in the rear, too. Legroom isn’t quite as cavernous as the longer Superb even with the seat slid all the way back, but it’s more than adequate.

Children or young teenagers will find the third row of seats offers enough head and legroom, though that depends on whether the middle row has been reclined or slid forward. Adults won’t have much fun back there, but you could argue that this class of car isn’t designed to seat seven fully grown adults. 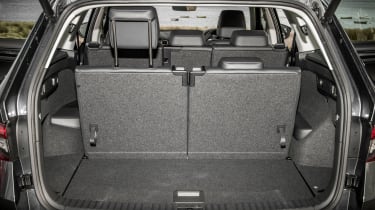 As the Kodiaq sits quite high off the ground, the powered tailgate is a useful feature, because it opens wide. It reveals a large aperture, which makes loading the boot simple, plus there’s no lip to contend with.

With a 835-litre boot in the five-seat version, the Skoda offers a cavernous level of load space. Fold the seats down and this increases to 2,065 litres.

In the seven-seater, the Skoda has a 270-litre capacity with all the seats in use – similar to most superminis – but this increases to between 560 and 765 litres in five-seat form, depending on which position you set the 60:40 split sliding middle seats.

With all seven seats folded there’s 2,005 litres on offer – the rearmost seat mechanism has to go somewhere, which explains the difference to the five-seater. Plus, when all the seats are in place you don’t get as much space in the third row as you might expect. It’s easy to access, but leg and headroom are tighter than in the Kia Sorento and roughly on par with the more compact Land Rover Discovery Sport.

The majority of Skoda Kodiaq models have a towing capacity of 2,000kg, but the maximum any Kodiaq can pull is 2,300kg – only available with the 148bhp automatic four-wheel drive 2.0-litre diesel. There are also models which offer 1,800kg and 1,950kg braked trailer towing capacities.