The Kodiaq is impressively safe, while it should match the rest of the brand’s range in offering great reliability

The Kodiaq sits on the same MQB platform as first debuted on the Superb. It’s also found in the Ateca and Tiguan, while almost all of the powertrains and technology are already found across the VW Group’s architecture. While it’s too early to say for sure, that part sharing should make the cars more reliable as any problems should have been identified on previous models.

Skoda also has very high satisfaction ratings in our 2019 Driver Power owner satisfaction survey, finishing 5th overall out of 30 manufacturers. The Kodiaq itself finished in an impressive 6th place out of 100 cars – owners loved its practicality, infotainment and build quality. Just over 22 percent of owners surveyed reported faults with their Kodiaq, with most blamed on electrical glitches. By contrast, the Peugeot 3008, which finished one space behind in 7th, saw a shade over 15 percent of owners report a problem. 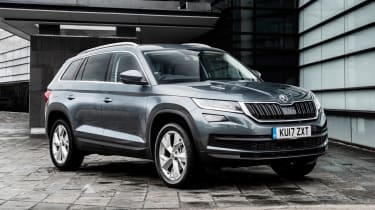 With seven airbags fitted as standard across the range, plus autonomous braking with a pedestrian monitor and multi-collision brake, to stop secondary impacts after a crash, it’s no surprise the Kodiaq achieved a full five-star Euro NCAP safety rating.

All Kodiaqs come with a typical (but unremarkable) three-year, 60,000 mile warranty as standard. Although there is the option to extend that to five years and have the mileage capped at 100,000 miles for additional peace of mind. Kia’s Sorento comes with seven years of cover as standard, however, while the Hyundai Santa Fe gets five years of cover.

Servicing costs have yet to be announced by Skoda, but we predict them to be roughly the same as the Superb: for that car it currently costs about £139 for an intermediate (10,000-mile) service and around £259 for a full 20,000-mile service. Fixed price service plans will also be available in due course.