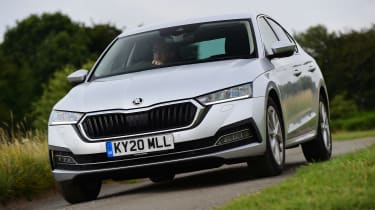 Key rivals have tampered with their winning formulas, but the latest Octavia is a great example of how to hone an already-successful product and just give people more of what it does well. The high price of this SE L First Edition keeps us from awarding the full compliment of stars, but we can’t wait to try cheaper, petrol-powered versions. There’s colossal potential for this to be the new family-car benchmark.

The Skoda Octavia has always been a car with a sharp sense of focus – not too posh, nor too expensive, but targeted superbly at those who want just that little bit more space than you get in a Volkswagen Golf, but who don’t want to pay a premium for it. We were very impressed when we drove the estate version of the new generation of Octavia in the UK in June; now we’ve had our first chance to try the hatchback.

To recap, the Octavia stays on an evolution of the MQB platform that underpinned its predecessor. It has grown a little – the hatchback is 19mm longer overall – and gained a sharp new look. The fourth-generation Octavia is being launched with 1.5-litre petrol engines and a 2.0-litre diesel in two states of tune. Here we’re driving the 114bhp diesel version.

The line-up of trim levels is also in transition. The usual SE and SE L variants are there, but so far only in First Edition form. You’ll have to wait a month or two yet to get the full range, including an entry-level S.

The SE L First Edition we’re driving here has 17-inch alloys, headlight washers, suede upholstery, electric adjustment on the driver’s seat and an uprated 10-inch infotainment system. The kit list also features keyless entry and start/stop, LED ambient lighting and powered, heated and folding side mirrors. It’s fully laden, pretty much – but then, it ought to be, with prices starting at £25,150, a little way north of the Octavia’s traditional heartland. 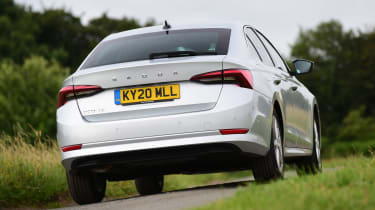 On the move, the larger 2.0-litre diesel is incredibly refined and achingly efficient. There’s still an unmistakable diesel note as you fire it up, but it doesn’t take long to warm up and calm down. And on the move, you’ll need to rev it way beyond its natural power and torque band to make it sound anywhere near noisy. Chunky sidewalls on the tyres and good wind insulation make this a very comfortable cruiser: more so, we’d argue, than Skoda’s range-topping Superb.

You’ll be able to travel for a long while in this version, too, because this Octavia is a reminder of how excellent a good diesel car can be if your lifestyle includes frequent long journeys. Over a mix of fast motorway miles and swift back-road driving we saw an average of more than 66mpg on the trip computer.

The headline figure of 114bhp isn’t that impressive for a car of this size but, of course, it’s diesel, so there’s a chunky 300Nm of torque available from just 1,500rpm. Drop below that and you’ll notice some lag, but in truth the motor is so solid low down that you’ll find yourself shifting up early, and watching the economy figure rising as you do so. Admittedly, that approach is the one that suits this Octavia best. There’s not a great deal of involvement to be had from the steering, and while the ride is impressive, this is a big car that accepts more spirited driving, rather than encouraging it.

Inside, Skoda hasn’t got carried away with any frippery, so while there are indeed much smarter materials than before – within a sniff of the latest VW Golf’s, we’d argue – there’s no less functionality. The prominent infotainment system sits proud of the dashboard, but while there are no rotary switches to control the heating, Skoda has substituted them for a permanent digital strip that sits at the lower edge of the 10-inch display. You don’t get this in a Golf or Leon. Swiping your finger across the base of the display does just one thing: adjust the volume. And it’s all the better for it.

Practicality has been slightly enhanced over the previous model, and rear-seat passengers will be impressed by the amount of knee, leg and headroom on offer.

And the boot capacity, already a class benchmark, rises by 10 litres to 600 litres; that’s 120 litres more than you’ll find in the latest Golf. Fold down the rear seats with the handle on the side of the boot and you’ll have a 1,555-litre load bay with a commendably huge (and flat) floor.