Can a tiny 1.2-litre engine work in this new, even bigger Skoda Octavia? We drive it to find out 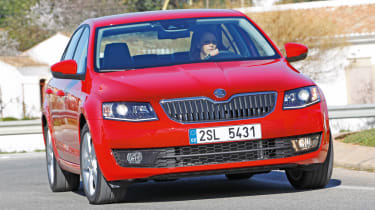 This 1.2 TSI is the pick of the Octavias we’ve driven so far. The petrol engine makes more sense than the diesels unless you do mega miles, while it works better than you might imagine in such a sizeable car. Much of the reason it makes so much sense is the value on offer – the phrase ‘lots of car for the cash’ was made for this model.

The new Skoda Octavia is even bigger than before: 90mm longer and 45mm wider to be precise. So how does this not-so-small family hatch measure up with just a 1.2-litre engine under the bonnet?

Surprisingly well is the short answer, mainly because this is no ordinary 1.2. Turbocharging means it produces 103bhp and 175Nm of torque, and it’s actually quicker than the 1.6-litre diesel we featured in Issue 1,252 – 0-62mph takes 10.3 seconds versus 10.8 seconds in the TDI.

The best bit is it feels really lively: throttle response is good and, while you’re not exactly going to be tearing away from the lights, there’s decent in-gear grunt. It’s quieter than the diesel as well – still not exactly whisper quiet (although you might enjoy the mildly fruity exhaust note), but there’s more hush at speed.

The lighter weight of the petrol engine pays dividends with the handling, too. While the Skoda’s still no sports car, this version feels more wieldy than the diesel. Turn-in is slightly sharper and the steering feels more responsive. Ride quality is okay – not VW Golf smooth, but comfy enough and not likely to jolt or jerk too much.

Where this particular model scores massively is on value. At £15,990, it’s £2,050 cheaper than the cheapest diesel. You’re going to have to cover a fair few miles to make that extra expense worthwhile – our back-of-an-envelope calculations show that even if you do 15,000 miles a year, the money you’ll save on fuel over three years won’t even go halfway to paying back the extra £2,050 the diesel car costs in the first place.

Our test car was a top-spec Elegance model, which won’t be available with the 1.2 engine in the UK. Nor should you want it; the cheapest S-spec is plenty generous enough. You get alloy wheels, air-con, a DAB radio with Bluetooth (all operated via a touchscreen), leather steering wheel and a host of safety kit that includes a driver knee airbag.

Space inside is similarly generous with a boot that’s bigger than a Ford Mondeo’s and loads of room for passengers. The transmission tunnel that runs down the middle of the car means the fifth passenger will have to adopt a knees together, feet apart position, but otherwise all will be comfy with decent shoulder and headroom.

The driving position is good, too, with the steering wheel moving in and out and up and down, plus plenty of seat adjustment. Dials are clear, controls are easy to reach and the dash is smart and upmarket.

Build quality is a step up from the old car, although there are a few areas where you’ll notice some cost cutting over the latest (brilliant) Golf. There aren’t chrome edges to the window switches (outrage!) and the plastic for the glovebox lid and between the seats feels a tiny bit flimsy.

We could easily live with that, and, given the value here, we’re starting to overlook the duller than dull looks of the car, too.