Supercar... or a super car? After 28,000 miles,our snapper knows what he prefers! 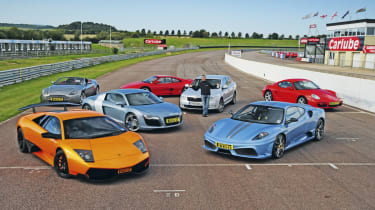 Which model in this picture would you say is most desirable? Well, parked alongside an array of mouthwatering exotica, I doubt our long-term Skoda Superb would be your first answer.

And in this company, it won’t set your pulse racing around a circuit either – but for my money, the Czech really is a bona fide supercar!

The Superb’s appeal lies in the host of things it does so well. For example, its odometer is now reading over 28,000 miles – good going in only 12 months – but the Skoda still feels incredibly solid.

If anything, I reckon it’s getting better with age. The punchy diesel engine has loosened up nicely, yet still returns fuel economy of 44mpg. It makes the Superb a relaxing long-distance cruiser, while high-speed stability is also impressive.

Driving the huge Skoda on trips up and down the country to photograph group tests and features for the magazine has seen it negotiate a real mix of roads and conditions – and not once has it been found wanting. It has dealt with everything I’ve thrown at it effortlessly.

As a photographer, my biggest demands are usually reserved for the boot, and the Superb’s massive load area has accommodated all of the camera kit and cleaning gear I could wish for.

And it does all this without requiring me to fold the rear seats. As a result, it easily takes care of the Gibson kids, along with anything else they deem to be an essential travel companion!

Up front, the clever interior has a practical layout and the logical controls make using the sat-nav and stereo really easy – not something you can say about every modern car.

So, can I find fault with it? Well, yes, but only in two respects. Firstly, there’s the styling, which is a bit of an acquired taste. And then there’s the innovative boot mechanism. While I quickly got to grips with the dual-opening bootlid, I have to question whether it’s really worthwhile.

The system means you have to do without a rear wiper and with the mornings getting colder, you get no rear vision until the heated screen does its job. This doesn’t help at all when it’s raining, as the rake of the rear screen means it doesn’t clear.

The reasons behind the twin openings are probably down to Skoda’s desire to save money by not developing hatch and saloon versions of the same car.

Annoyingly, though, the default is to work as a saloon, and I rarely load the car in this setting. It’s also a pain trying to get someone else to retrieve anything from the boot, as they are unlikely to know the simple hatchback opening sequence for the tailgate.

There is an obvious answer to these complaints, as the firm unveiled the Superb estate at the Frankfurt Motor Show. It features a conventional tailgate and, to my eyes, is more attractive than this model. It promises to be the ultimate snapper’s car.

And that brings me to the thorny issue of how I’ll cope without our Skoda. The firm makes some clever motors, and I’ve unwittingly become an ambassador for the brand!

So, while I’m not sure about life after the Superb, I can report that it lives up to its name.

Few long termers win the praise that has been heaped on our Superb, but it’s all merited.

We should have known what to expect after its road test debut, where the Superb beat the Ford Mondeo, Audi A4 and a used BMW 5-Series. Since then, it has been crowned family car of the year at our New Car Awards, which shows you just how much we rate it.