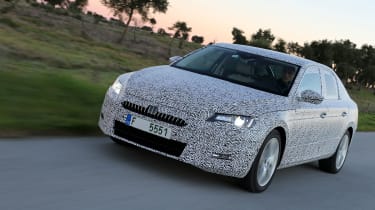 We tested one of the earliest built Superbs Skoda has built, and consequently the car isn’t representative of the car which will be on sale in Summer 2015. However, the basic ingredients were there and the Superb is impressive. In overall terms, it doesn’t do much that is game-changing but it far exceeds the current car’s abilities and adds extra style and technology to the mix. We’ll be able to deliver a proper verdict next year, but for the moment we’re impressed.

Auto Express has been behind the wheel of the brand new Skoda Superb months before its official unveiling – and the firm’s boss hitched a lift too, eager to give us the full story of the new car.

Driving camouflaged pre-series Superbs through rural Portugal, we have been able to get a good impression of the car customers will be able order next Summer for a September delivery – and our first taste is a good one.

The new third-generation Superb has a big job on its hands, though. Since the arrival of the ‘new’, Volkswagen-owned Skoda Superbs in 2001, the Czech brand has sold 700,000 of its posh model worldwide over two model generations. But Professor Dr Vahland, Skoda’s charming and easy-going chairman, wants the new car to exceed 700,000 in its lifetime. 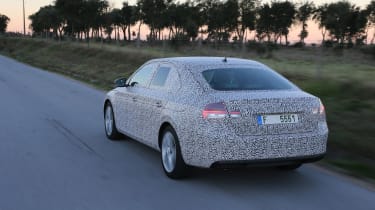 “We want to be the best in the class – we want to be at the very top,” he told us, sitting shotgun. “We are not talking about beating the VW Passat here – that’s moved up a class – but we want the new Superb to sit above cars like the Vauxhall Insignia. We want to be the most technological car customers can buy in this class but still offering great value for money and providing those key Superb attributes which have been so attractive to so many customers.”

Last year Brits bought roughly 6,000 Superbs – but, with the UK being such a key market for Skoda, Vahland wants that number to increase.

“The UK is a great market for us – it is stable. But we feel the new Superb has a lot more to offer and we expect to steal customers from many other rival brands.”

And we are inclined to believe the new Superb could be a winner for Skoda, judging by this first impression. Our car was highly camouflaged in order to give preying eyes little to look at, but before our drive Vahland revealed a Superb free from its Zebra skin wrap. At first glance it look little more than an upscaled Octavia hatch, but spend a few moments looking at the creases and intricate design details, and the Superb is a very good looking car. 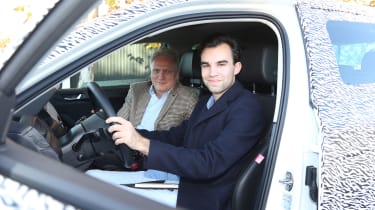 From the front it’s clear to see the daring look as debuted on the VisionC concept earlier this year has found its way onto the new big Skoda. The nose takes on a similar pose as the new Passat’s – low and aggressive with the front wheels subtly bulging from the bodywork.

Skoda’s family grille is larger and wider than seen on other models and the chromed slats stand proud from the grille surround. Eye-catching bonnet creases lead up to the windscreen while the front bumper – with sharp trapezoidal design details – sit below jewel-like headlamps. The Octavia’s headlamp clusters are taken to the next level on the Superb as it features a more style-driven look – the clever automatic dimming headlights and day-running LED blades are surrounded by plastic details that look like eye-lashes. 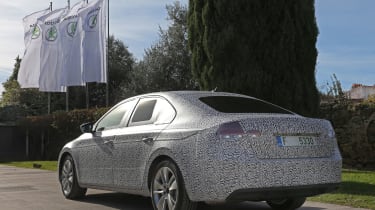 Instead of sitting on top like most other cars, the edges of the bonnet sit on the front wings. The bonnet edge leads into a character line that runs along the entire length of the car to sleek, Audi A3 Convertible-like rear light clusters and an uncluttered rear-end. A more sport-looking roofline with a thick chrome edged window surround is particularly smart.

Inside the cabin is conventional and sober. While the car we poked around in was not a final production version, we discovered that the overall cabin quality has been bumped up just as you’d expect on a new model, but the dashboard is very much like that you’ll find in the current Skoda Octavia, just larger. To the rear the current Superb’s massive 157mm rear legroom remains while the boot has grown – it now measures 625 (with the seats up) and 1,760 litres (seats down).

But while the design is straightforward, the technology you’ll find in the cabin is not. Vahland is understandably proud of the Superb’s level of technology. Clutching an iPad, he takes great pleasure in showing how passengers in the front and in the rear can control the car’s infotainment system. Indeed, rear-most passengers can mount their iPad in a special holder located in the rear bench’s centre armrest or clip it into a cradle that hangs from the front seat headrest.

Some Superb models will come with an eight-inch touchscreen in the centre of the dashboard with Apple CarPlay and from 2016 there will be wireless smartphone charging in the car. The delay is due to phone companies not yet deciding upon a universal charging induction system, says Vahland. 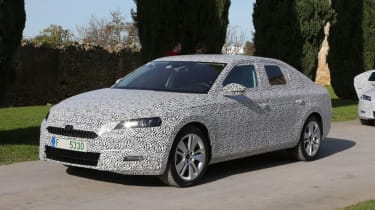 But while the Superb has been pushed into premium levels of car connectivity, it won’t be able to stand on the toes of Volkswagen and pinch the stunning 12.3-inch digital dashboard from the Passat. “It may come in the future but at the moment we feel the typical Skoda customer isn’t interested in this type of technology – they prefer analogue dials,” another executive told us.

Like an ever-increasing number of Volkswagen Group products, the new Superb uses VW’s MQB platform – which underpins everything from a Golf to an Audi TT, and importantly the Passat. On the road it’ll come as little surprise to learn that the big Skoda drives and handles much like the Passat.

What is surprising though is that customers will be able to spec their Superbs with the optional Dynamic Chassis Control. When fitted the Superb can be turned from a beautifully comfortable car into a hard-riding one in Sport mode – which goes against the Superb’s greatest characteristic and that’s having a fantastic ride quality. Overall, the Superb handles with confidence and offers great refinement – it’s a notable step up from the outgoing car.

In Europe and beyond there will be the choice five petrol engines – from 123bhp 1.4 with active cylinder management to a 276bhp 2.0 – and three diesels ranging from an 118bhp 1.6 Greenline to a 187bhp 2.0. It’s the latter range the UK will definitely be taking, but Skoda UK is as yet undecided on whether it’ll be offering the pleasantly smooth petrols.

We tried 1.8- and 2.0-litre petrols and more importantly the 187bhp 2.0-litre TDI with four-wheel-drive and it delivered a good blend of performance and refinement on a combination of fast-flowing Portugese motorways and twisting country roads. Meanwhile with specifications, expect S, SE, Elegance, Greenline and top-drawer Laurin & Klement models – but that’s yet to be confirmed – and an estate version is slated for an early 2016 launch.

The Superb will get its global reveal in February, and judging by how appealing Skoda’s latest products are – Octavia and Fabia for instance – the Superb’s future looks good.