Great new mud-plugger won’t be a rare sight on road... or off 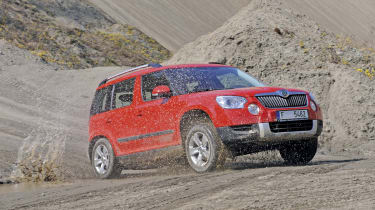 We’ve high praise indeed for the Yeti! Skoda has a fine reputation for producing genuinely different cars that offer real all-round ability at the same time. But the newcomer takes this to fresh heights. It packs an amazing amount of space and flexibility into such a small body, yet it offers as much off-road ability as any owner will ever need. Factor in a precise driving experience, a high-quality cabin and a fine range of petrol and diesel engines, and you have got a practical and desirable addition to a growing market – not to mention one of Skoda’s best models yet!

Finally! Auto Express has become the first magazine in Britain to track down the Yeti. After more than four years of waiting, Skoda’s first-ever off-roader has arrived – and we’ve driven it.

Sales of the cheeky go-anywhere SUV start in September, when it will lock horns with crossovers such as Nissan’s Qashqai and MINI’s upcoming Crossman.

Apart from a few cosmetic tweaks and the addition of rear doors, the car is virtually unchanged from the concept which debuted at the Geneva Motor Show in 2005. It promises to be the most flexible and versatile Skoda yet – so how does it shape up?

Well, as ever, this Czech car stands out from its rivals. Spotlights and a protective grille give the neat Roomster-style face some muscle, while at the back there’s a skid plate and chunky bumpers.

Roof rails and a squat stance finish off a design that owes more to a tougher, raised estate than an aggressive 4x4. Buyers after a beefier-looking model can opt for a mooted Scout version due later.

At a mere 4.2 metres long, the Yeti is only slightly bigger than a Citroen C3 Picasso, but it’s large on the inside. There’s ample head and legroom in the back for three six-foot-tall adults, and the boot is also pretty spacious, at 410 litres with the seats up.

As in the Roomster, these can be individually slid back and forth, folded flat or removed altogether, freeing up 1,760 litres of space. Additional practicality comes in the shape of a tough luggage-covering net and a host of lashing points. Meanwhile, the dashboard also scores top marks, drawing on the Roomster and Superb with excellent quality levels and a simple layout.

Under the skin, the Yeti has much in common with the Octavia 4x4 (itself based around the MkV Volkswagen Golf), but gains rear suspension parts from the Passat for improved stability and refinement.

The version we drove also gets four-wheel drive with a Haldex clutch, capable of varying torque to individual wheels, although effectively offering front-wheel drive in normal motoring conditions.

Skoda expects only a third of Yetis to be 4x4s: the rest will be solely front-wheel drive, available with a new 105bhp 1.2-litre turbo petrol or 110bhp 2.0 TDI common-rail diesel unit.

Four-wheel-drive versions will come with the latter, also in 140bhp or 170bhp guise, and there’ll be a 160bhp 1.8 turbo petrol, too. Gearboxes are a six-speed manual and a DSG auto.

On our drive in Norway, we tried the 1.8-litre petrol and 140bhp 2.0 TDI diesel. Both are impressive, but the latter just gets the nod, boasting more torque (320Nm versus 250Nm) for overtaking, excellent refinement and the promise of nearly 50mpg and CO2 emissions of around 140g/km.

The driving experience is good, too. While the Yeti isn’t sporty in the same way as Ford’s Kuga, it does feel like a slightly higher, well sorted estate, with light but precise steering, strong grip and a firm yet comfortable ride. The raised seat height also gives a great view out.

Thanks to a hill descent system and a clever push-button off-road setting – which softens throttle response and tweaks the traction control and ABS for loose surfaces – the car can easily tackle steep slopes and rutted paths.

Prices haven’t been confirmed just yet, but with the range expected to start at around £14,000, the Yeti should prove to be another excellent Skoda.

Rival: Nissan Qashqai There’s much to like about the Qashqai: it looks the part, drives brilliantly and doesn’t cost the earth to buy or run. It’s a practical family model, too, but isn’t as flexible or as capable off-road as the Skoda.