The turbo engine makes this ForTwo an excellent every day/city car and suitable for out-of-town driving, too 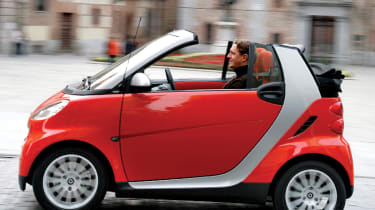 In terms of quality, practicality and dynamics, the new ForTwo is leagues ahead of its predecessor. The turbo engine makes the Smart a sensible everyday car. It is still peerless in the city, but has the added dimension of real out-of-town pace, refinement and handling. While it's not cheap - this top-of-the-range Cabriolet is expected to weigh in at around £12,000 - if you rarely carry more than one passenger, it could be the perfect all-rounder.

Squeeze your eyes half shut, and in the bright sunshine bathing our new Smart ForTwo Cabriolet, you could be forgiven for thinking we have been handed the keys to the wrong car...

You see, the new model looks so similar to the previous generation, you have to be a bit of an expert to spot the difference between the two.

However, appearances can be deceptive, so while the newcomer has the same distinctive outline, tiny overhangs and Tridion safety cell - finished in either silver or black - it's bigger and better all-round. Indeed, the increase in size is central to the update. The overall length has grown by 195mm, and the width by 42mm. So although the ForTwo is still small enough for the urban cut and thrust, accommodation for passengers and luggage is vastly improved.

We've already driven a diesel version of the Coupé (Issue 946), and were impressed with its new-found refinement. But how does the Cabriolet measure up? We tried a 1.0-litre petrol-powered model to find out.

As with the rest of the car, the fabric hood appears to have barely changed. It offers a full-length sunroof above and a collapsible rear section behind. The whole mechanism is now electrically operated and can be opened and closed at any speed. You can even remove the struts above the door for the maximum open-air effect. With the top up, refinement is excellent, and the low levels of noise at speed nearly match the Coupé's.

Drop the hood and the improved cabin is clear to see. All the plastics are of a far higher quality, while the seats are bigger. Neat touches such as the twin pods for the rev-counter and clock remain, although some of the original's funky charm is lost.

While it loses some of its cheekiness, increased space and comfort more than make up for it. Even after a long motorway run, you'll be able to emerge without aches and pains or ringing in the ears. In fact, the new Smart feels much more at home on the open road than you'd think. This is partly due to the fresh petrol engines which have been developed in conjunction with Mitsubishi.

All three units are 999cc in capacity, but deliver 61bhp, 71bhp and, in turbocharged guise, 84bhp. Pick of the bunch is the last of these. Punchy and refined, the turbo unit turns the Smart into more than just a city car. Over-taking moves and motorway inclines are dispatched with ease, and the motor also returns almost 60mpg.

The greatest improvement, however, is to be found in the handling department. New, more direct electric power-steering provides the ForTwo with sharp responses, while the slight increase in width means drivers get a greater feeling of mid-corner stability. Even the ride has been improved, with much of the see-sawing movement of the previous model banished. Overall, you have the impression you are in a much bigger car, and no longer feel intimidated on major roads.

One weak link remaining in the driving experience is that old Smart Achilles heel: the car's semi-automatic transmission. Engineers at the company claim big improvements in shift speed and smoothness, but the five-ratio unit is still a pain to use.

While downshifts are now smooth and quick, upchanges - particularly under hard acceleration - are ponderous, and in full automatic mode the system is simply too slow to react to the throttle. Yet although this is frustrating, it doesn't detract much from the overall package.

Owners of the previous ForTwo will be delighted at the many improvements, particularly under the bonnet. What remains to be seen is whether the additional refinement and performance will be enough to tempt drivers out of more traditional models.