We drive the new limited-edition Smart ForTwo. It gets a classy cabin to boost appeal, but the old problems remain 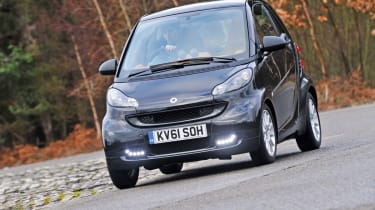 The Boxfresh is one of the classiest ForTwos on the road. The cabin is a luxurious place to spend time and there’s lots of extra gadgets. But driving in stop-start traffic on rutted city streets soon becomes tiresome. The Smart crashes through potholes and lurches through gear changes as you struggle to get comfortable with the awkward driving position.

Drive through any city centre and you’re likely to see Smart ForTwos everywhere. But if you want one that’s a little more exclusive, then this Boxfresh Style model – limited to 55 cars – could be for you.
In a tie-up with clothing designer Boxfresh, the ForTwo has been given an interior overhaul that includes ‘Cognac’ leather for the seats, dashboard and door panels and some carbon fibre-style accents.
Video: watch CarBuyer's video review of the Smart ForTwo
[[{"type":"media","view_mode":"content_narrow","fid":"69259","attributes":{"alt":"","class":"media-image"}}]]
Our car was powered by the 70bhp 1.0-litre three-cylinder petrol engine, which provides nippy performance around town, enough pace for tackling motorways and a tax-free CO2 emissions figure of 98g/km.
The Smart’s automatic gearbox remains a drawback, though. Shifts are irritatingly slow and during complicated manoeuvres – such as three-point turns – it occasionally gets confused and won’t shift out of neutral.
But for all the times you curse its pitfalls, you’ll find yourself equally grateful of the Smart’s ability to nip through tight gaps and park in tiny spaces. Smart desperately needs to work on the awkward driving position and uncomfortable ride before you could consider the ForTwo the ideal city car, though.
On the plus side, the £11,700 price tag is good value when you consider leather upholstery, heated seats, sat-nav and Bluetooth are all thrown in.
Share this on TwitterShare this on FacebookEmail