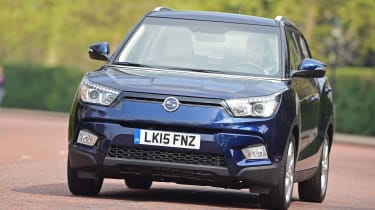 SsangYong has thrown all it has at the Tivoli and come up with a characterful and fashionable product like no other SsangYong we’ve ever seen. Don’t be put off by the badge – the Tivoli is a match for the Nissan Juke and Renault Captur in terms of quality and is far more keenly priced and better equipped. We predict the diesel engine and manual gearbox will be a better match than the petrol auto, and in that spec it could well earn another star.

The new SsangYong Tivoli is yet another entrant into the supermini SUV, but marks an important milstone for the Korean manufacturer that has always lived in the shadow of Hyundai and Kia. Whereas SsangYong’s previous efforts have lacked the quality, design and technology to make an impact over here, the Tivoli is a serious contender in all those areas and majors on value for money, too. Unlike SsangYong’s current line-up of four-wheel drive workhorses, the Tivoli is tailored to what modern customers are asking for - so it puts fashion above four-by-four ability. We were given the keys to a Korean-spec, left-hand drive car in the UK months before it arrives in showrooms to see if the Tivoli can really shake up the compact crossover segment.

• Best crossovers to buy now  It certainly has the looks to take on the class’s best. The Tivoli flies in the face of SsangYong’s weirdly-styled models like the old Rodius, and head in a far more contemporary direction. Marginally longer, shorter and lower than a Nissan Juke, the Tivoli is a smart looking thing. In fact, its shapely wheel arches are similar to the Juke’s, while the bluff front-end resembles the Kia Soul. A MINI-like floating roof (which can be ordered in contrasting black or white for an extra £400) completes the cohesive mix of European, Korean and Japanese styling themes. 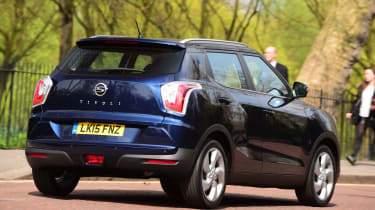 But it’s on the inside where the Tivoli marks a massive step-change for SsangYong. Gone are the acres of flimsy plastics finished in depressing black and in comes an interior that bursts with character, colour and substance. The dashboard is made of decent-quality plastics twinned with silver and shiny black plastic inserts, while a seven-inch touchscreen on mid-spec EX and top-spec ELX models brings a welcome dose of modernity. A chunky multi-function steering wheel and soft leather seats (amazingly available as standard on mid- and top-spec Tivolis) give a touch of luxury. There are still smatterings of shiny, scratchy plastics lower down, but the overall quality is a match for a Juke or a Renault Captur. It’s roomy, too. There’s plenty of space up front while three passengers can sit comfortably in the back thanks a floor that’s almost flat. There’s loads of knee room for six-footers and the boxy roofline results in plenty of headroom. Open the tailgate and there’s a 423-litre boot which puts the Tivoli up with the class’s best comfortably beating the Juke’s 354-litre capacity and just 32 litres down on the Captur’s 455. 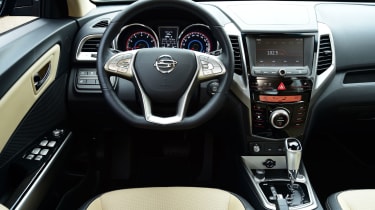 SsangYong has kept things simple by offering just two engine options – a 126bhp 1.6-litre petrol and a 1.6-litre diesel with 113bhp along with two- or four-wheel drive and six-speed manual and automatic transmissions. We drove the petrol auto and it’s here where the Tivoli’s strong case falters a little. Although refined at idle at low speeds, the petrol engine sounds a bit thrashy at over 4,000rpm, but performance is perfectly adequate. With 126bhp, 0-62mph takes exactly 11 seconds and while that’s half a second quicker than a Juke 1.6 CVT petrol, the Nissan returns 44.8mpg compared to the Korean car’s 39.2. Higher emissions also mean you’ll be paying more road tax with the Tivoli’s 167g/km figure putting it into the £205 a year bracket – the Nissan’s slots in at £145. The diesel fares better with emissions of 113g/km in the two-wheel drive manual model, but it costs £1,250 more than the petrol in the equivalent spec. 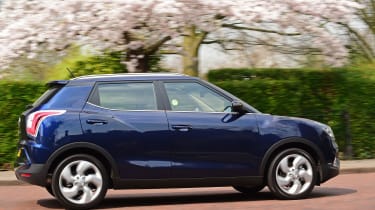 On the move the six-speed box switches between gears smoothly and is the same unit MINI uses – it’s far more refined than the Juke’s CVT, but it takes its time to change ratios. On our short test route, the Tivoli impressed – there’s a rigidity to it that is similar to cars costing far more, and the steering is accurate enough. A ‘Flex’ system offers different levels of steering assistance but like a lot of other Korean cars, it’s unnecessary – just leave it in ‘Normal’ would be our advice. But it’s how much SsangYong is charging for its new B-SUV that gives the Tivoli a big advantage over its competitors. Prices kick off at just under £13,000 with our top-spec ELX coming it at £17,000 exactly, and with fully-packed equipment list consisting of heated leather seats, 18-inch alloys, dual-zone climate control, sat-nav and a reversing camera, it makes the Vauxhall Mokka and Mazda CX-3 seem very pricy. SsangYong aims to sell 1,200 Tivolis this year and 3,500 in 2016 and on based on first impressions those numbers seem easily achievable. It’s the right car at the right time for SsangYong, and proves this up and coming manufacturer is about to turn a corner.

Get full details of the SsangYong Tivoli's specs and prices here...