The latest model in the Subaru range to reinvent itself is the revised Forester. 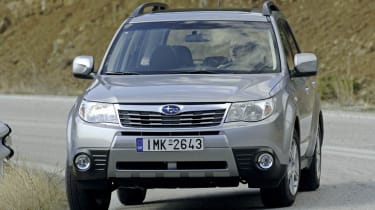 WE can’t knock Subaru for having the ambition to widen its mainstream appeal with an SUV Forester. But we can criticise its execution. As with the latest Impreza before it, the Forester disappoints throughout. The looks are generic, the 2.0-litre engine is a mediocre performer and the handling no better than average. Solid construction and an attractive price work in its favour, but it’s difficult to recommend over rivals.

Is Subaru’s reinvention complete? Last year, it surprised us all when the latest Impreza arrived as a hatchback rather than a saloon. And now, it has dropped another bombshell with an all-new Forester shaped liked an SUV, instead of the estate car of old.

Mainstream appeal is what Subaru says it is chasing – but will the move alienate traditional buyers when the Forester launches in April?

The styling is what strikes you first. The ‘hawk-eye’ headlights and blistered ridges above the wheelarches are a nod towards individuality, but overall, the design of this third-generation model is lacking in inspiration.

It has neither the rugged charm nor the road presence of the model it replaces. And that’s a pity, as there’s no question mark over the Forester’s build quality. While the bland dashboard from the Impreza is hard and scratchy, the rest of the car feels as solid and enduring as all Subarus do.

It’s now 75mm longer, 45mm wider and 110mm taller than before, and offers more space inside than ever, too. Standard equipment is generous, with the £17,995 entry-level 2.0X we drove getting air-conditioning, heated front seats and cruise control.

If you want leather seats, a premium audio system and a sunroof, there’s also a 2.0XS, at £21,895. Both use a 2.0-litre boxer engine and a five-speed manual box as standard.

A four-speed automatic is available for an extra £1,000, but be warned: this doesn’t provide the slick and telepathic changes we’ve come to expect from modern self-shifters. It shuffles erratically between ratios, and while you can nudge the selector forwards or back to make your own shifts, this only adds to the confusion.

The five-speed manual is the better option, putting you in control. Yet the 2.0-litre powerplant – which deli-vers 148bhp and 195Nm of torque – still feels and sounds very strained. The four-cylinder engine was already struggling to propel the Impreza’s 1,410kg kerbweight, so dropping it in the nose of the 1,465kg Forester does it even fewer favours.

The newcomer cruises quietly on motorways, offering decent economy at a combined 33.6mpg. But tackle a back road or steep incline, and it has neither the low-down grunt nor the top-end power to make the Forester entertaining. The engine is the weak link in the car’s already underwhelming chain – the new 2.0 boxer diesel version can’t come soon enough.

Subaru hasn’t set a date for the arrival of the oil-burner here, but has confirmed that the high-power turbo petrol variant – which is available in Japan – will not come to the UK.

The unit’s high CO2 emissions are blamed for this, and although the decision may disappoint fans of the old turbo, you do question how well the Forester would cope with 222bhp.

Even though the car features new multi-link rear suspension and Subaru Vehicle Dynamics Control as standard, the handling is as uninspiring as the styling. The finesse of the Impreza chassis – on which the Forester is based – shines through occasionally, but there’s also plenty of body roll and pitch through the corners.

And that’s a major letdown for a company famous for its driving dynamics. While the previous generation surprised everyone by combining a practical interior with excellent cross-country performance, this new version simply disappoints.

With the Impreza and now the Forester, Subaru is aiming for the main-stream – and we hope it succeeds. But at the same time, it may just have alienated the very people who made the brand such an enormous success in the first place. And that’s a shame.