The Subaru Levorg estate has been updated for 2017, but the changes are almost unnoticeable 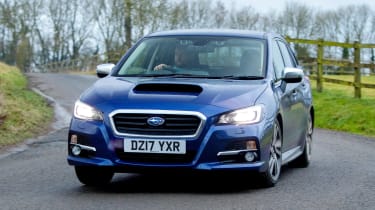 The almost unnoticeable changes to the Subaru Levorg for 2017 aren’t enough to elevate it above the status of interesting also-ran. It’s spacious, solid and well equipped, and undoubtedly has appeal to a loyal band of Subaru buyers who value durability and permanent four-wheel drive security above desirability. However, the lacklustre sole powertrain choice and firm ride mean that it’s unlikely to become less of a niche choice any time soon

Four wheel-drive estates are ten-a-penny these days, but there was a time when only a handful of manufacturers offered them. A couple of decades ago, most estates with power sent to both axles were either off-road biased with raised and softened suspension, or had an Audi badge.

Subaru has had plenty of success globally as a result – and still is doing so, with 965,000 all-wheel drive cars shifted last year. The Legacy was one of the cars that upheld that tradition for years before this model, the Levorg, replaced it in 2015. We’re driving the lightly revised 2017 version to see if the 4WD estate is still a Subaru specialty. 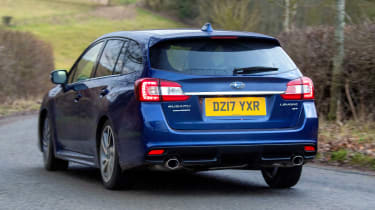 Sales of the Levorg have been decidedly modest in Britain, but Subaru obviously thinks it nailed the recipe first time around because the 2017 model year updates aren’t exactly extensive. Apart from minor fettling so inconsequential that Subaru didn’t think it was worth detailing, the powertrain, suspension and chassis are unchanged. The exterior and cabin aren’t visibly different, either.

However, some work has gone in to improving refinement, with tweaks to the door seal material and additional engine insulation. Subaru has also brought in its ‘Eyesight’ driver assistance system, a dual-camera set-up mounted high in the windscreen that engineers claim is more advanced than rivals’ systems. It brings along safety features such as pre-collision braking, adaptive cruise control and lane keep assist.

On the road, you’d be hard pushed to notice any difference. But that’s the idea. The Eyesight system goes about its business unobtrusively, only once flashing up an alert on the dash to warn of an obstacle on our test route. Similarly, you’d struggle to hear a reduction of noise in the cabin unless you drove it back to back with the 2016 Levorg. To all intents and purposes this is the same car, but an interesting one nonetheless. 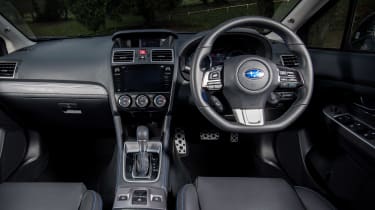 Despite its proud bonnet scoop promising a return of Impreza-like aggression to Subaru, the Levorg is a car that majors on smoothness. The 1.6-litre turbo petrol engine is mated solely to a CVT gearbox that gives a passable impression of physical gears with ‘stepped’ full-throttle changes, but it’s at its best when taking it easy, because its lack of fixed ratios reduces jerkiness.  It’s not particularly noisy for a CVT – though what little you can hear is a merely dull drone and distant whine.

Performance is merely acceptable rather than sparkling, especially given the less-than-exceptional on-paper fuel economy (a casualty of Subaru maintaining permanent four-wheel drive). It’s a shame that there’s no higher-output petrol with a manual gearbox or, crucially, a torquey and frugal diesel available to broaden its appeal.

Body control in the bends is surprisingly tidy, there’s loads of grip and it feels quite agile for its size, but the numb and overly light steering (even in sport mode) and almost SUV-like high driving position put pay to any desire to hustle it along quickly. It’s a shame that the ride is on the firm side, too, because decent refinement means it’s an otherwise competent cruiser.

Cabin quality is largely up to the standard you’d expect from the family estate class, with only a few sub-par materials letting down a car that otherwise feels built to last. Standard kit is as generous, and so it should be, given the £30k list price. If you can live without four-wheel drive (and we suspect most actually can), there are a number of more rounded large petrol estates on the market for less.