Subaru's Levorg is an all-wheel-drive, boxer-engined estate targeting the likes of the Mazda6 Tourer. Is it any good? 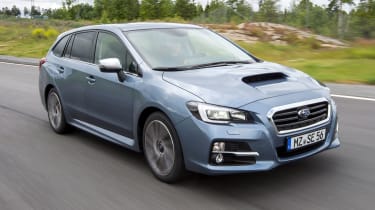 The Levorg is destined to work at the very fringes of the market, for loyal Subaru buyers and those needing its much-vaunted four-wheel drive and looking to replace their Legacys. Which is a shame, as with a better transmission, or a diesel offering, the Levorg would be a far, far more viable proposition.

The Volvo V60 and Mazda6 Tourer: that’s apparently the sector of the market where Subaru sees its new Levorg GT competing. Interesting foes, as neither have quite the technical package of the Subaru, the firm resolute in its specification of a symmetrical four-wheel drive system and a boxer engine.

In the Levorg that’s an all-new 1.6-litre turbocharged direct injection petrol engine, which delivers 167bhp and 250Nm of torque. That power output is just shy of Subaru’s own naturally-aspirated 2.5-litre petrol, while the torque figure is actually greater.

Driving all four wheels via Subaru’s Lineartronic CVT automatic transmission it’ll reach 62mph in 8.9 seconds, though Subaru is less focused on the Levorg’s performance, instead concentrating on its agility. It has benchmarked this practical estate against more sporting models, using its own BRZ sports car as a marker, as well as models like Audi’s S3.

It’s all to the benefit of safety, Subaru citing agility as crucial in its cars’ make-up, laying on a test track with high-speed lane changes and slaloms to demonstrate exactly that. For a car without a sporting focus its resistance to roll is very impressive and the body control tidy, though seemingly not to the detriment of ride comfort - at least as much as can be ascertained on a smooth test track. 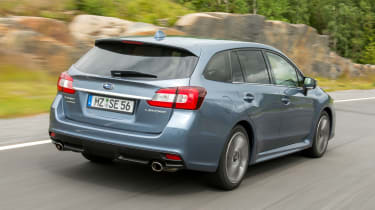 The steering is weighty and accurate, but the wheel doesn't deliver any real feel – the Levorg pushing into predictable understeer if you’re a little bit ambitious entering a corner. It's all very surefooted, grip is high, traction equally impressive, though it achieves all this without the playfulness of Subarus of old.

Yet speaking to Subaru’s engineers that’s exactly what it’s been trying to create, the Levorg, for all its Mazda and Volvo-chasing aspiration, actually takes a great deal of its inspiration from Subaru’s fourth-generation Legacy Tourer, the most popular model it has made. Its successor, the fifth-generation car, was considered too big by customers, though thanks to some intelligent packaging Subaru has squeezed all the space of that car, and more, into a smaller physical package.

Rear seat passengers have plenty of head and legroom, while the boot opening is usefully proportioned and the boot itself offers as much as 1,446 litres of capacity when you drop the rear seatbacks down – with the simple push of a button. Up front the driver faces a neat instrument binnacle, while the centre console houses a touch screen infotainment system that’s leagues ahead of what Subaru used to offer. Build quality is, as usual, exemplary, though now it’s backed up by materials that exhibit some tactility and quality finishes. 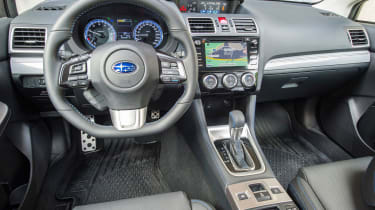 In the UK, the Levorg will be offered in just one trim and with plenty of standard kit – 18-inch alloys, privacy glass, sports seats, keyless access and push-button start, dual-zone air conditioning, Bluetooth connectivity and cruise control – the Levorg makes a decent case for itself.

There’s a but though, and it centres on the drivetrain. The new engine is smooth, but if anything it’s too quiet, Subaru’s characteristic four-cylinder boxer beat all but gone. It performs admirably with useful low-rev torque making it an easy performer. If only it were mated to a better transmission, as the Lineartronic CVT automatic, regardless of setting, or whether you choose to take over via the wheel-mounted paddles, is detrimental to the drive.

It’s noisy, slow to react and intrusive at high revs. Factor in emissions and economy that are only average against rivals at best, and the Levorg is certain to remain a bit-part player.