Aggressive saloon sells on rally heritage. But is that still enough? 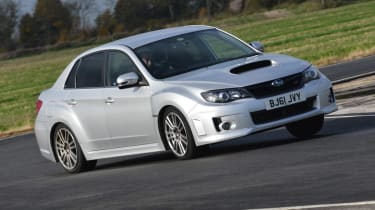 Time has clearly caught up with the Subaru. With its dated cabin, poor refinement and old-school, laggy power delivery, the STi belongs to a bygone era. Yet it’s not without its charms, and on the right road the all-wheel-drive saloon is huge fun to drive. A recent price cut makes it more attractive, but huge running costs mean owning a WRX is only for the brave.

While BMW's M cars cut their teeth on the world’s race tracks, Subaru’s high-performance models earned their spurs on rough-and-tumble rally stages. And, unlike the sober-suited M135i, the WRX’s motorsport origins are clear to see. With its bulging wheelarches, gaping bonnet vent and quad exhausts, the aggressive-looking STi model never fails to attract attention. You’d struggle to call this four-door saloon attractive, though, and to our eyes the identically priced, better-proportioned hatchback is more of a looker.

Whatever bodystyle you choose, you’ll end up with the same low-rent cabin. The dash looks dated alongside the BMW’s modern layout, while the plastics are hard and shiny. At least there’s plenty of kit to distract you, with climate control, keyless entry, xenon lights and Bluetooth all featuring as standard.

The Subaru is surprisingly roomy, too. Tall passengers will be comfortable in the back, while the boot will carry 420 litres of luggage. As with the BMW the five-door has a versatile hatch opening, but it’s hobbled by a cramped 301-litre load bay. Both versions have a split/fold rear bench, which helps boost practicality.

However, driving will be the only thing on your mind when the WRX’s uprated 2.5-litre flat-four bursts into life. Yet despite matching the BMW’s power and torque figures, the STi was slower in our track test, due to its combination of a clunky six-speed manual box and peaky delivery; it took 5.6 seconds to cover 0-60mph, which was a full eight-tenths longer than the 1 Series.

Peak torque of 450Nm doesn’t arrive until 3,500rpm, so the Subaru feels a little lethargic at low revs. Engaging the Sport Sharp mode improves throttle response, but there’s still a pause before the turbo kicks in. Yet once the revs climb past 3,500rpm the STi accelerates every bit as explosively as its rival. Factor in a raucous, off-beat exhaust note reminiscent of the late, great Colin McRae’s WRC Impreza, and you’ll soon be grinning from ear to ear.

That smile will remain through twisty roads. The Subaru’s steering is light and lifeless, but it’s direct and there’s plenty of front-end grip. Body control is also excellent, while the permanent four-wheel-drive system provides staggering traction, even on slippery surfaces. You can adjust the electronically controlled centre differential, too, for even better grip on snow and gravel.

Sadly, though, this agility comes at price. There are no adaptive dampers, so the ride is firm on bumpy roads. On top of that, wind and road noise are intrusive on the motorway, making the Subaru the less relaxed cruiser here.

Still, the car claws back some ground in the showroom. At £27,774, it undercuts our 1 Series auto test car by £3,851 and the manual version by £2,251. Amazingly the WRX also has slightly stronger residuals, meaning you’ll get more cash back at trade-in time.

Will this be enough for it to score a memorable victory over the multi-talented BMW?