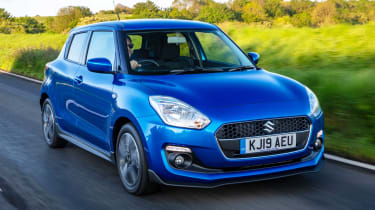 The Attitude trim level injects a little sporty style into the Suzuki Swift range without any extra expense. As a result, the same pros and cons of the other models remain: it’s fun to drive and cheap to fuel, but it’s lags behind some rivals for refinement and the interior feels a little cheap. Still, at this price it’s easy to forgive some of the shortcomings. If you don’t need the extra power of the sweet 1.0-litre Boosterjet engine, the Attitude will be the pick of the Swift range.

This is the Suzuki Swift Attitude: a trim level that aims to give the Ford Fiesta and Volkswagen Polo competitor a hot hatch vibe on a supermini budget. Prices start from £14,099, meaning that the Attitude costs about the same as the most basic versions of its more popular rivals.

Using the Swift SZ3 trim as a starting point, the Attitude is upgraded with a string of sporty add-ons. Around the lower edges of the car, the Attitude gets splitters, skirts and diffusers finished in the same sabon carbon fibre-esque trim that you get on the Swift Sport.

Further changes include a mesh grille at the front and a big spoiler at the back. The usual SZ3 wheel trims are replaced by 16-inch alloy wheels, and the Attitude’s exterior extras are completed by front fog lights, rear privacy glass, and special badging. 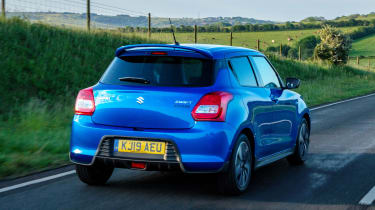 Inside, the Attitude’s kit levels largely mirror the SZ3, which means that air conditioning, Bluetooth and front electric windows are all standard. However, where the SZ3 gets a very basic radio head unit which looks like a late-nineties throwback, the Attitude gets a touchscreen navigation system. It’s a bit clunky to use and the graphics aren’t the best, but it’s fine for the money, especially considering it comes with both Apple CarPlay and Android Auto. The dashboard itself is logically laid out, but it looks a little plain and the materials feel a brittle compared to the similarly-priced alternatives.

The Attitude is only available with the Swift’s entry-level engine, however. That means that it misses out on the lively 1.0-litre turbocharged ‘Boosterjet’ engine and the mild-hybrid options offered in other trim levels; instead power comes from a 1.2-litre naturally-aspirated petrol unit. While 89bhp and 120Nm doesn’t sound like much, the Swift has weight on its side: it tips the scales at around 900kg, so performance is lively enough for town driving and the occasional motorway run.

But unlike so many cars in this class now, the 1.2 lacks a turbo, so anyone used to a Ford Fiesta Ecoboost or the 1.0-litre TSI used in Volkswagen Group cars will find that it needs plenty more revs and a lot more gearchanging to make the same progress. However, that’s not a complete disaster, as the five-speed manual box is fun to shift between ratios.

And fun is a theme that very much runs through the Swift’s general disposition. That light weight pays dividends through the corners, where it feels agile and keen to turn in to corners. There’s not much body roll either, though some rivals do feel more composed and more relaxing across a bumpy road. Many are quieter at higher speeds, too, so the Swift is at its best around town. 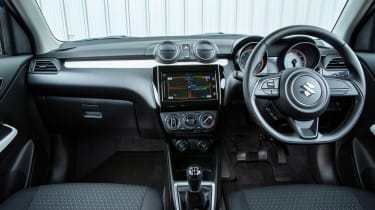 It’s small for the class, measuring roughly 200mm shorter than the supermini average. This has its pros and cons: its dinky dimensions make it easy to park, but conversely it’s a little cramped in the back seats and the boot.

Fuelling costs will be low, thanks to official fuel consumption figures of 55.4mpg – a number which seemed fairly achievable in the real world during our test drive – and CO2 emissions rated at 124g/km. Insurance costs are higher though: while many rivals dip under group 10, the Swift is rated at group 25.

The Suzuki Swift Attitude is currently available to order on a zero per cent PCP finance deal. This means that with a £2,210 deposit, buyers can finance the Attitude over four years at a rate of just £139 per month.