A new Suzuki Swift has arrived, but can it rival the class leaders in the supermini sector? 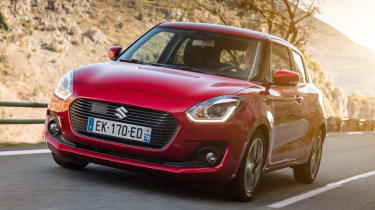 The Suzuki Swift is an easy enough car to like, with smart design that builds on the cute looks of its predecessors, and some excellent efficiency figures. But its interior finish is no better than the class average, the ride is brittle and the infotainment system is clunky and slow to respond. It is also short of a USP in a class where it’s notoriously hard to stand out. Pricing and finance offers will be the key if it’s to rise above the likes of the Hyundai i20 and Kia Rio to do what Suzuki wants: challenge the excellent Skoda Fabia and the all-new SEAT Ibiza.

Suzuki is rapidly developing a complex range of small cars. We’ve already been impressed by the Baleno, and the quirky Ignis offers something different from the mainstream. But now it’s time for a new generation of the firm’s ‘centre ground’ supermini: the Swift.

The Suzuki Swift has shifted 127,000 units in the UK since the car was ‘rebooted’ back in 2005. Now the firm has set bold targets for the new model; it wants to sell at least 20,000 examples per year to British customers, enough for it to overtake the Skoda Fabia and SEAT Ibiza to enter the top-10 sales chart for superminis. 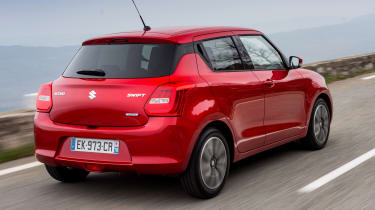 The latest Swift makes use of the same lightweight construction as the Baleno, so it sheds about 10 per cent of its mass compared with the outgoing model. Indeed, with kerbweights as low as 890kg, it’s just about the lightest offering in the class.

On paper, the new car’s dimensions look encouraging; it’s actually about 10mm shorter than the outgoing Swift, but crucially, its wheelbase is 20mm longer - a tweak designed to improve cabin space. Boot capacity increases by 54 litres too (now 264 litres), although it still falls short of what you’ll find in a Ford Fiesta, Kia Rio or Dacia Sandero.

Just two petrol engines will be offered. The entry-level unit is the 1.2 Dualjet four-cylinder with 89bhp and 120Nm of torque. It manages 0-62mph in 11.9 seconds, while returning official combined fuel economy of 65.7mpg and 98g/km of CO2. 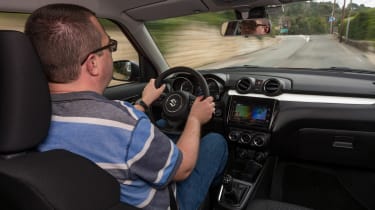 The other engine is Suzuki’s 1.0-litre three-cylinder, direct-injection Boosterjet turbo. It produces 110bhp and 170Nm of torque between 2,000rpm and 3,500rpm - enough to take the Swift from 0-62mph in a more sprightly 10.6 seconds. It’s not quite as efficient, though, with combined economy of 61.4mpg and CO2 emissions of 104g/km.

Suzuki’s SHVS mild-hybrid system is offered on both engines too - as long as you go for the range-topping trim level. It places a lithium-ion battery underneath the front passenger seat and uses it to harness regenerative braking energy and power a small integrated starter generator. This, in turn, assists the engine when the car is accelerating, helping to save fuel.

SHVS is offered on the 1.2 in conjunction with four-wheel drive, helping to negate most of the extra weight that the more complex transmission brings (CO2 emissions rise, but only to 101g/km). And when paired with the 1.0, it becomes the cleanest Swift of all, with CO2 emissions of just 97g/km. 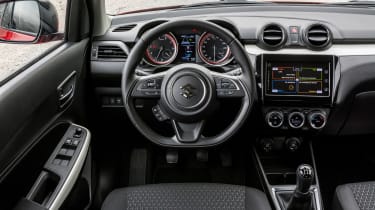 The standard gearbox, incidentally, is a five-speed manual available across the range. However, you can have the 1.0 Boosterjet non-hybrid with a six-speed auto in the top-spec trim level; it’s actually the fastest model in the line-up, with a 0-62mph time of 10 seconds flat - though CO2 emissions of 114g/km mean that it’s also the least efficient version.

The range will start with SZ3 trim, which is available only with the 1.2-litre engine. It brings DAB and Bluetooth, air-con, LED daytime running lights and a leather-covered steering wheel - but makes do with 15-inch steel wheels and manually operated rear windows.

Step up to the SZ-T (1.0 Boosterjet only), which is expected to account for 40 per cent of sales, and you’ll add a seven-inch infotainment screen with Android Auto, Apple CarPlay and Mirrorlink, a rear-view camera, 16-inch alloy wheels and front fog lights.

The range-topping SZ5 will be offered with the mild-hybrid versions of both the 1.0 and the 1.2 (the latter with four-wheel drive), and the non-hybrid 1.0 as an automatic.

SZ5 piles on the kit; you get the 4.2-inch LCD display between the instrument dials, as well as sat-nav, climate control, snazzier polished alloys, LED headlights and tail-lights, adaptive cruise control, electric windows all round, keyless entry, reach adjustment on the steering wheel and electric folding door mirrors.

You get a bit more safety kit, too, with a forward-facing camera and laser sensors that deliver lane departure warning and high-beam assist, along with autonomous emergency braking. 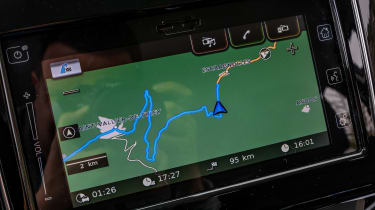 Swift devotees should expect a slight bump up in the entry point in the range, since the old basic SZ2 trim is being dropped, along with the cheaper three-door variant. Full prices will be announced in May but it’s already clear that the old £9,000 starting point is likely to move up to around £11,000.

We’ve been testing a 1.0 Boosterjet hybrid, in a foreign trim level very close to what the UK will call SZ5. You’ll notice the engine’s characterful three-cylinder burble as you pull away, but it’s smooth enough and the turbocharger means there’s usable torque from below 2,000rpm – so it’s not as if you have to work it very hard. Its best work is pretty much done by 4,000rpm, in fact.

Once it’s up to speed, the Boosterjet thrum drifts into the background; at 80mph you’ll be pulling 3,000rpm, but you’re unlikely to hear the engine at all. This is as much down to considerable wind noise from around the A-pillar and side mirrors as it is the engine’s fine manners. There’s quite a noticeable whoosh at anything approaching motorway speeds. 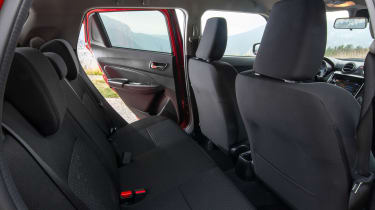 The rest of the basics are sound enough; the control weights, including the steering, are nicely weighted and consistent, and the five-speed manual gearbox has a pleasingly short throw and is happy enough to shift quickly.

The chassis set-up is equally deft, so the Swift feels nimble enough; its nose tucks in nicely when you point it at a corner, and it stays admirably flat through long, sweeping bends. The trade-off to this, though, is that the suspension configuration - MacPherson struts up front and a beam at the back - is caught out a little too frequently on broken surfaces. The rear in particular fidgeted regularly over our French test route; we’d expect this to be compounded by the UK’s poorer roads, despite Suzuki’s claim that much of the car’s development was conducted in Britain.

The cabin has space for four adults, although six-footers are likely to find their knees pressed up against the back of the front seats if similarly tall people are occupying them. The boot, meanwhile, is a decent shape once you get over a sizeable lip. The rear seats split 60:40, but they don’t fold down flat at all; indeed, they introduce a hefty step in the floor, so it won’t be easy to slide heavier items into the expanded load bay. 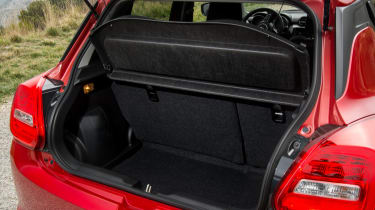 The whole environment feels tightly screwed together, with the sort of dependable, solid switches that we’ve come to expect from Suzuki. But it’s desperately short on flair; even our range-topping car had swathes of hard, black plastic, with only a single colour insert across the dashboard to brighten things up. There are precious few soft-touch materials, in fact, so while there’s a feeling of quality, there’s not much sign of luxury.

You might think that the new infotainment system could make the difference in this regard but you’d be disappointed. It has all of the right credentials, with decent smartphone integration that allows you to use your phone's navigation on mid-spec models. However, while the screen itself is a decent size, it doesn’t offer a stellar resolution. The system’s processor appears to be easily overwhelmed, too - so you end up waiting for it to respond after each letter when you’re typing an address for the navigation, for example.

It’s no better than what you’ll find in higher-end Kias or Hyundais, in fact - and still seems a notch behind the premium system in the Fabia, with the new Fiesta and Ibiza poised to raise the game on in-car entertainment yet further when they arrive later in the year.