First time out, our Toyota Auris didn’t quite come up to scratch. But, 4,000 miles later, it’s beginning to prove itself 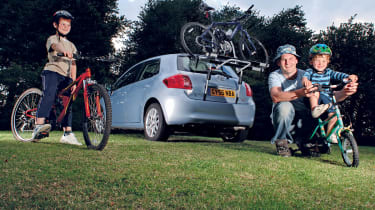 I’m feeling a bit guilty. In my first report on our new long-term Toyota Auris, I gave the car a pretty rough ride. I was less than inspired by the car’s looks and design, especially as it came within a year of the reinvented Honda Civic.

One of my main problems was the noisy, unrefined engine, and I wasn’t that taken by the dimensions of the vehicle, either. Having looked after a Kia Sportage for a year, the Auris meant downsizing in every department. However, four months on and 4,000 miles later, the Toyota has made a remarkable comeback. And one of the main reasons is that I bought a bicycle!

Motoring in central London is a miserable business. What with the £8 Congestion Charge, roadworks and ever-increasing traffic, cycling beside buses can come as light relief. So, the chance to nip into work through the capital’s streets with my bike strapped on to the back of the car, then pedal home in the evening, has redefined the way I drive.

Firstly, it means I don’t have to pay the £8 daily congestion fee nearly as often. I’m also fitter, and on days when I’m full of energy, I leave the car at home and cycle both ways. Live Earth? You bet.

Fitting a bike rack is one of the easiest things I’ve done. Despite the Ikea-like instruction booklet, I had the rack assembled and up on the motor in less than an hour. Two cycles sit locked securely above the tail-lamps, so there is no need for an extra light board.

At weekends, it allows me and my two boys to drive out into the countryside to find some rougher trails. The Auris is also joining the green-living vibe, averaging 48.4mpg. A tank of diesel seems to last ages, and the only noticeable drop in the impressive figures comes, ironically, when the bike rack is attached! In fact, it’s the frugal engine that’s won me over.

In my previous report, I got so wrapped up in the car’s failings that I forgot to notice its strengths. At first, the engine seemed tractor-like, but over time it has loosened up. It’s still not the quietest powerplant around, but the 2.0-litre unit does pack a fair punch. Add in the lowish driving position, and you’ve got an enjoyable, nippy town ride.

And, thanks to the six-speed gearbox, the Auris has no problem eating up the miles on longer motorway treks. Recent trips to Devon and North Lincolnshire have really tested its staying power. The car cruises capably, and on several occasions I had to check my speed as it crept beyond what was sensible.

Generally, the Auris is quite comfortable to drive. The seats don’t give me any aches or pains, but I still can’t get that excited about the interior design.

Nevertheless, I really like the dashboard lights and sleek door handles. My eldest son, George, rates the lamp that indicates when the passenger airbag is switched on or off, because this determines whether he can sit in the front seat.

However, on the negative side, the switchgear feels a little cheap, and the high centre console is simply awkward. It boxes in my left leg, which gets uncomfortable on longer journeys – something highlighted when we were caught up in the recent bad weather. We needed to make a fast exit from a long weekend in Louth, North Lincolnshire, as heavy rain caused extensive flooding. The car made it through many of the waterlogged minor roads, before hitting stationary traffic. The 200-mile journey took 11 hours, and it was during that time I learned to hate the centre console like no other piece of plastic.

Still, nobody else noticed as the rest of my family slept like babies for the majority of the journey. So it seems that we might have started feeling at home in the Auris after all.