Toyota's response to the Fiat 500; the special-edition Aygo Platinum 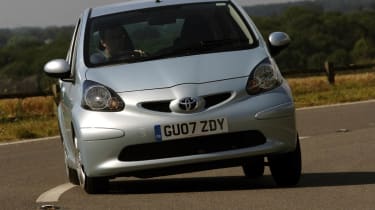 There’s nothing dramatic about this Aygo special – the changes are little more than cosmetic updates – but it does make financial sense compared to the rest of the range. It’s also a good city car, with a great engine, low running costs and Toyota’s quality reputation. Yet the Aygo is far from perfect, and expensive, too. With tough rivals such as Fiat’s 500 offering more fun and style for a lower price, even the Platinum has its work cut out.

Can it be a coincidence that in the same month Fiat’s new 500 goes on sale, Toyota launches a special-edition Aygo? Chance happening or not, car manufacturers are facing tough competition from the baby Fiat – and this is the Japanese firm’s response.

It’s called the Aygo Platinum, and is a highly specified version of the company’s excellent small car. Priced from £7,995 in three-door form, with the five-door version starting at £8,245, the newcomer costs £550 more than the Aygo+ on which it’s based, but offers £1,000-worth of extras.

Crystal Silver metallic paint and 14-inch alloys kick off the improvements, while the cabin features leather and Alcantara suede-look upholstery.

You also get six airbags, electric front windows, a six-speaker radio/CD player complete with a socket for an MP3 player and split/fold rear seats. Air-conditioning doesn’t come as standard: the luxury costs another £500, taking the price to £8,495.

Inside, the newcomer is well laid-out, individual and modern. The driving position is reasonable thanks to an adjustable steering column, and there is adequate room for four adults. On the move, the highlight of the Aygo experience is its engine. Delivering only 67bhp, the 1.0-litre three-cylinder unit doesn’t provide neck-snapping punch, but it’s big on character, with a distinctive, off-beat sound.

You’ll also benefit from fuel economy of more than 60mpg and, with CO2 emissions of 109g/km, annual road tax is just £35. On the downside, there is a lot of road, engine and wind noise which, together with a rather firm ride, makes motorway journeys tiring.

So, are the extras the Platinum brings worth the money? Just about. If you were to specify an Aygo+ with air-con and alloy wheels, you would end up paying nearly £9,000 anyway, so it represents decent value.

But whichever way you look at it, the Aygo is an expensive city car. We would advise customers to consider the mechanic­ally identical Citroen C1 and Peugeot 107, which are around £1,000 cheaper. And then, of course, there is always the Fiat 500.