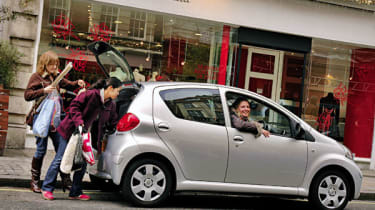 That time of year is fast approaching again. You know - when the queues in the shops are as long as the queues on the roads outside. So this year, I thought I would be organised and head out early to do my Christmas shopping. Having tempted some work friends into joining me, we headed off in the Toyota Aygo.

I was a little concerned about how much stuff we were all planning to buy, and whether the small boot would cope, secretly hoping that no one was planning to buy a large Scalextric set or any bulky furniture! Things got off to a good start, though. Both of my shopping companions were impressed with the space inside the Aygo. There was plenty of legroom in the front and back, and it wouldn't be too much of a squeeze to fit three across the rear bench.

The back seats are comfortable and roomy, plus with it being a five-door, there's easy access to get in and out, even with hands full of bags. The boot coped surprisingly well with our festive purchases, and what we couldn't get in there fitted comfortably in the rear.

The city centre traffic was as busy as ever, but the Aygo easily managed to weave around cars that had double parked. And as for finding somewhere to put the baby Toyota? Well, I was able to squeeze it into an ideal spot close to the shops that many other cars would have had trouble with. Ah, the joys of driving a small city motor - at times like this the Aygo is in its element!

The cabin attracted plenty of favourable comments, as did the rounded dash and instruments. However, I would prefer it to have a proper glovebox, rather than a shelf where everything is on display. The exterior styling matches the interior, with its rounded rear and front lights, which I think makes it stand out from other similar models.

The fuel consumption is always good around town, and that's definitely where it performs best, thanks to the tight turning circle and peppy performance. On long motorway trips the little Toyota starts to struggle, but it manages to hold a steady cruise up hills, and by small car standards is comfortable and stable.

And I can't overstate how useful the iPod plug-in port is - particularly since I can't currently listen to the radio. It's entirely my own fault - at a recent visit to the car wash I forgot to remove the aerial, and it snapped off. At least I now know what I want for Christmas... a new aerial. Wonder if the girls had that on their shopping list?

Second opinion I didn't need to wait until Christmas to put the Aygo's load-lugging abilities to the test. A trip to the DIY store proved a walk in the park for it, as dropping all of the seats allowed a 1.5-metre long bath panel, heated towel rail and assorted bathroom fittings to be swallowed with ease. Admittedly, there was only room for the driver left, but it's testament to the Toyota's roomy cabin that I could fit my purchases in at all. Dean Gibson, sub-editor