We get behind the wheel of the bold new Toyota C-HR crossover with hybrid power, but is it a winner?

The head-turning C-HR is a worthwhile addition to the fiercely fought compact crossover class. It’s not quite as practical as its mainstream rivals, but it makes up for this with its distinctive styling, classy cabin, grown-up driving dynamics and decent value for money. However, unless you really want to save on tax, we’d steer clear of the slightly disappointing hybrid in favour of the sweet and eager 1.2-litre model.

Toyota has arrived rather late to the crowded compact crossover party, but with its daring C-HR, it’s hoping to get noticed.

Created to compete against models such as the Nissan Qashqai and SEAT Ateca, the newcomer is one of the first Toyotas designed exclusively with European buyers in mind. The Japanese firm has gone bold, mixing coupe, concept car and off-roader design cues to head-turning effect.

Bosses at the brand are clearly confident of success, claiming that the C-HR will find 100,000 homes across Europe over the next year. That’s an ambitious target, and to find out whether it’s justified, Auto Express took an exclusive early test drive of the hi-tech petrol-electric hybrid version, which is expected to make up 75 per cent of sales. 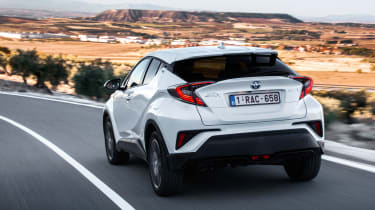 Walk up to the C-HR – which stands for Coupe High Rider – and you’ll be surprised by how big it is. The design is heavily based on the C-HR Concept that made its debut at the 2014 Paris Motor Show, and the daring mix of angles and high-riding SUV stance disguises the surprisingly bulky dimensions. At a glance, the car looks about the same size as a Nissan Juke, but it actually fills a similar footprint to a larger Qashqai. Like it or loathe it, the C-HR certainly attracts attention.

Climb aboard and it’s clear the designers’ efforts haven’t been limited to the exterior. A wraparound dash with distinctive blue insert and large tablet-style infotainment screen dominate the cabin, while repeated diamond patterns in the overhead courtesy lights and headlining add interest.

Yet the most impressive thing about the interior is the quality. Top-notch materials are used throughout, and there’s decent space. The thick C-pillars mean rear seat occupants feel hemmed in, but there’s surprising head and legroom. Up front, the high-set seats and large windscreen give a good view of the road.

Underpinning the car is the same Toyota New Global Architecture that also forms the basis of the impressive new Prius, which means the C-HR handles with composure. Engineers have spent a lot of time fine-tuning the car for European roads, and it shows. The steering is naturally weighted and progressive, there’s strong grip, and body roll is well contained. Deep potholes can send a shudder through the cabin, but for the rest of the time the C-HR rides well.

Power comes from the same 120bhp 1.8-litre petrol-electric hybrid unit and CVT transmission as the Prius, but unfortunately the set-up isn’t as well integrated here. Where the Prius combines CVT gearbox and electric motor to deliver smooth and effortless acceleration, the C-HR seems to rely heavily on its internal combustion engine. Even gentle applications of the throttle send the engine’s revs soaring.

Worse still, the four-cylinder unit suffers from a coarse and intrusive note. There’s a Sport setting that sharpens the throttle response, but this only encourages the 1.8-litre unit to work harder, sooner. It’s not even as if the frenetic soundtrack results in eager performance, because the C-HR needs a leisurely 11.0 seconds to cover 0-62mph. 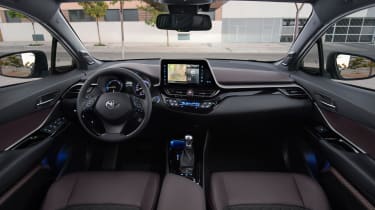 The new Toyota is also available with a 114bhp 1.2-litre turbo petrol and six-speed manual, and a brief drive in this confirmed it was a sweeter combination. Still, there’s no arguing with hybrid efficiency; diesel rivals won’t match the claimed 74.3mpg and 87kg/km CO2 emissions. Plus, with gentle use you’ll even get the C-HR to drive in zero- emissions electric mode for short distances.

At launch there will be three trim levels: Icon, Excel and Dynamic. Prices range from £20,995 for the entry-level 1.2 to a hefty £27,995 for our flagship Dynamic Hybrid.

All 1.2-litre cars get a choice of six-speed manual or CVT boxes, plus this unit has the option of four-wheel drive. There’s also plenty of kit, with all cars featuring climate and cruise control, plus Toyota’s Safety Sense set-up that brings adaptive cruise and autonomous emergency braking.