The Toyota Prius+ offers low hybrid running costs, but it's not the most spacious MPV on sale 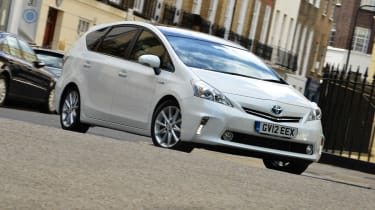 It has taken Toyota three generations of the Prius to try something completely new. Cue the ultra-practical Prius+, a seven-seat, tax-dodging, family car that's aimed at buyers of the Ford S-MAX and Vauxhall Zafira Tourer. A clever tiered seating system that folds flat into the floor gives the Prius+ an edge, but the high list price, cheap interior plastics and noisy CVT gearbox will put some buyers off. However, an MPV that's capable of returning 70mpg and a congestion charge exempt 96g/km of CO2, will no doubt win the hearts of many families.

Toyota has lifted the powertrain for the Prius+ directly from the Prius hatch. The only change is that the heavy nickel-metal hydride batteries have been swapped for a set of slim, lithium-ion ones. The batteries and 1.8-litre petrol engine combine to produce 134bhp, which means a 0-62mph time of 11.8 seconds. However, it's the sudden surge of torque from the electric motor that impresses over more conventional rivals like the Ford S-MAX and Mazda 5. However, push the Prius+ hard, and the whine from the CVT gearbox will have you putting your eco hat back on in no time at all.

Toyota’s main priority with the Prius+ was fuel economy and given the car’s bulk, a claimed figure of 70mpg is astounding. By emitting just 96g/km of CO2 it qualifies for free road tax, too – something none of its rivals can match. There's also a decent amount of kit, with even the base-spec T4 model getting a panoramic roof, head-up display and Bluetooth as standard. Plus, every Toyota comes with a free five-year warranty, which should help to keep maintenance costs to a minimum. However, the Prius+ is considerably more expensive to buy than both the Ford S-MAX and SEAT Alhambra.

The Prius+ looks just like the standard Prius from some angles, but it's in fact 155mm longer, 30mm wider and 85mm taller. The aggressive cuts in the front bumper house a set of bright daytime running lights and the sloping roofline makes the Prius+ look like it’s moving even when it’s standing still. The intricate taillights and sloping roofline are also very appealing. Inside, there's a new dash design, which is simply and effectively laid out. It's just a shame that the interior plastics feel a bit cheap, and the slither of silver trim down the side of the central display makes the whole setup look a bit lopsided.

The Prius+ gains an extra 155mm over the standard car, and by doing so gets two extra seats in the rear. The clever seating system is tiered, with each row sitting 45mm higher than those in front, which gives passengers a great view of the road ahead. Headroom and legroom are reasonable, and two adults can squeeze into the rearmost row of seats, but only for really short journeys. With all seven seats in place, the Prius+ offers a miserly 200 litres of bootspace, which increases to 1,750 litres with the back two rows of seats folded. This is considerably less than the Ford S-MAX and Alhambra which offer 2,000 and 2,297 litres respectively.

The Prius+ is still too new to feature in the 2012 Driver Power survey, but the Mk3 Prius on which it's based finished an impressive seventh, which bodes well for the practical seven-seater. Toyota as a brand finished fifth overall, too. The Prius+ hasn't been crash tested by Euro NCAP, but the standard Prius received a full five-star rating when it was tested in 20009. Standard safety kit includes stability control, ISOFIX fixings and driver, passenger, side, knee and curtain airbags. 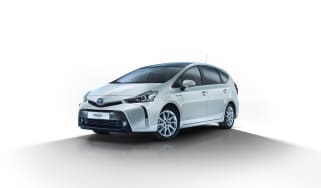 Toyota's seven-seat Prius+ hybrid gets new styling, equipment and suspension upgrades as part of a 2015 facelift
Toyota Prius+ vs rivals 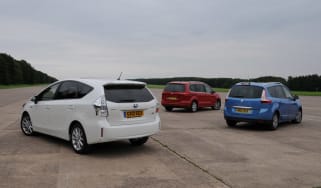 Does hybrid power work in an MPV? We test the new Toyota Prius+ against its rivals to find out
Toyota Prius+ 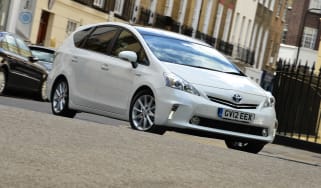 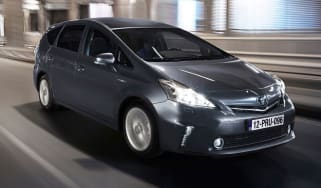