The competent Toyota is only let down by its cramped rear seats and high prices. 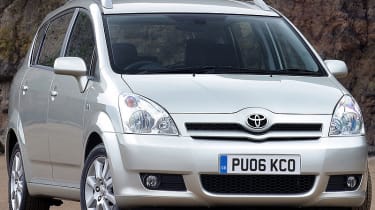 Driving The Verso is available with a 1.8-litre petrol engine, but it’s the two Lexus-derived diesels that impress most. The 2.2-litre motor is offered with two power outputs (138bhp and 189bhp), and is refined, smooth and never becomes strained – even under hard acceleration. The Verso feels urgent in diesel guise, with strong pace in all gears other than sixth. What’s more, it’s capable in corners, with good body control and plenty of grip. Like most MPVs, steering feedback is limited, yet it’s well weighted. If we were being picky, we could wish for more involvement, yet the Verso nevertheless inspired confidence, particularly at speed.

Marketplace The Verso was designed with European buyers in mind, and that’s clearly evident in the styling. A high waistline and small glass area give it a car-like look, while the smoothly raked bonnet and windscreen camouflage the MPV styling well. A name change in 2007 dropped the old ‘Corolla’ tag (the two were never mechanically related, anyway) and introduced a restyled front bumper, grill, headlamps and rear clusters. This brought it in line with the ‘family’ look sported by the Auris and Yaris. The seven-seat model offers an inclusive range, including a value-led SR variant, and competes with the Renault Scenic, Vauxhall Zafira, Mazda 5 and Honda FR-V.

Owning The Verso isn’t the longest compact MPV in its sector, but the wheelbase is ample, so it tries to make best use of its dimensions. However, there are compromises. The boot is small and overall load space with the seats folded isn’t the best. The third row of chairs is cramped and headroom is severely restricted – anyone over six feet tall won’t actually fit in. What’s more, the seats aren’t very comfortable. Worse still, the triangular-shaped windows are small and let in minimal light, so the Verso feels claustrophobic. At least it’s effortlessly easy to raise and lower the rearmost chairs. But things improve as you move forward. The middle row of seats is impressively comfortable, and each of the three chairs slides and folds flat individually, giving plenty of flexibility. Leg and headroom are good, while the outer seats slide forward and tilt in one action. We weren’t impressed with the strap pulls to fold the seats, however – they are difficult to grip, although again the chairs are a breeze to drop and raise. Only a single pull is required to lift the seatback, while the base slides neatly into position. In addition, the driving environment is a very pleasant place to spent time. There’s a good range of seat and steering wheel adjustment and on longer journeys the Toyota is good for tall drivers thanks to its car-like driving position. The centre console features stylish green back-lit details, and material quality impresses. Everything is solidly put together and elements such as the switchgear have a solid feel. All this doesn’t come cheap, however, even in 2007-on facelift form. But the Toyota compensates with strong residuals and good fuel economy.