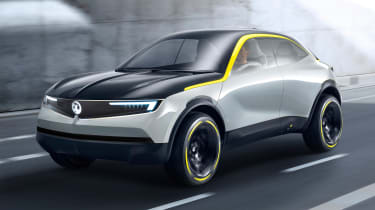 Vauxhall has pulled the covers off an all-new concept car called GT X Experimental, which will set the design tone for a flood of future Opel and Vauxhall models arriving in the 2020s.

The concept ticks nearly every niche box you can think of and is described as a five-door, all-electric, coupé-inspired compact SUV. It isn’t a direct preview of an upcoming new production model, and is instead a design study showcasing the brand’s future face.

So many of the design elements in the GT X Experimental will be found on the next Corsa, Mokka and Astra. 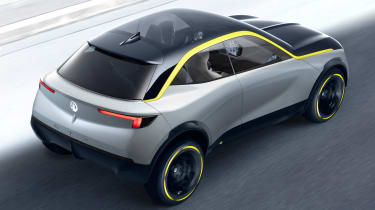 It’s also a warm-up act for Vauxhall’s impending electrification push. The brand recently promised that its entire line-up would be available with an electrified variant by 2024. Full EVs are in Vauxhall’s sights, too, with the manufacturer confirming an all-electric version of the next-generation Corsa will arrive in 2020.

The GT X Experimental is just over four metres long and is right at the smallest end of the SUV scale; it’s shorter than the SEAT Arona.

Underpinning it is an all-electric architecture, with a compact 50kWh lithium-ion battery at its heart. This suggests that the concept is based on PSA’s new e-CMP platform for small electric vehicles, because it has been designed to support battery packs 50kWh in size. PSA is planning four EVs on e-CMP by 2021.

Of most importance to the design is the theme found at the front and rear of the concept. The new design language is centred on what’s called the ‘Vauxhall Compass’, which uses strong vertical and horizontal axes to form a cross-shaped facia. At the front end of the car, the horizontal headlights contrast with the strong vertical line running up the bonnet, across the nose and down the front bumper, and the same theme is repeated at the rear.

The car’s nose features what’s known as the ‘Vauxhall Visor’. It’s a single sheet of plexiglass that spans the width of the front end, housing the headlights, badge, plus camera and sensor gear necessary to enable semi-autonomous driver assist features. The firm promises that both the Compass and Visor are design elements we’ll see a lot of on new Vauxhalls arriving in the 2020s, with the plexiglass Visor likely to be reserved for EVs, which don’t need a grille. 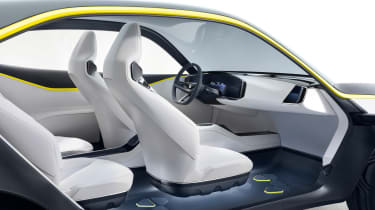 Elsewhere, the concept has strikingly short overhangs, with its 17-inch wheels pushed to the very corners of the car in a bid to free up interior space. Protective black cladding to the lower body adds a tough look to the concept.

Suicide-style hinged doors open to leave the entire cabin exposed, and the concept has no conventional B-pillar. Four individual seats are found inside.

The digital dash panel is also encased in a visor-like module and is said to be inspired by the car’s nose. Extra screens sit at the end of the dash, supporting the cameras that replace the door mirrors.