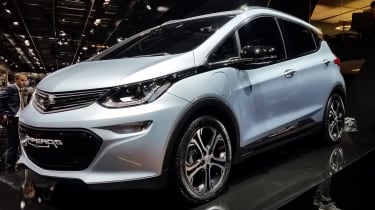 The Opel Ampera-e has been officially revealed at the Paris Motor Show - but it's been confirmed that it won't be rebadged as a Vauxhall and sold in the UK.

Based on the American market Chevrolet Bolt EV, the Ampera-e will join the Opel Group's range as part of a 29-strong model offensive to be complete before 2020. However, despite a plethora of electric cars in the UK including the Nissan Leaf, Renault Zoe and BMW i3, the group has elected not to let Vauxhall sell it here in right-hand drive - as it's too expensive to engineer.

In a statement, Vauxhall's chairman Rory Harvey said that the brand is "committed to having a future EV presence in its range". To that end, Vauxhall will be assessing a handful of Ampera-e models in the UK, with a view to a next-generation electric car for the UK market.

"‘The technology which underpins the new Ampera-e is of great interest to us, and we will be evaluating LHD cars from next spring and demonstrating them to clients. The fact that Ampera-e is not an eco-luxury or second car for customers broadens its appeal greatly, but it’s obviously vital that the car we sell in our market is right-hand-drive, and that won’t be available in the current generation.

The model, which sits inbetween the Corsa and Astra in terms of size, features a 200bhp electric motor producing 360Nm of torque and powering the front wheels. It's capable of 0-60mph in around 7 seconds and a top speed of 91mph.

Opel says the five-door Ampera-e will have a longer range than most other electric vehicles, with around 250 miles an estimated figure. 90 miles of range can be added in a 30min fast charge. For example, the new Nissan Leaf with a larger 30kWh battery can still only manage 155 miles on one charge. 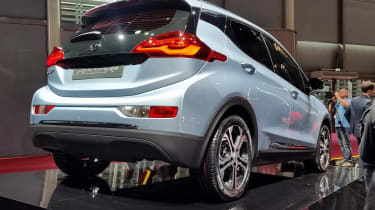 According to Opel the "flat battery pack" under the floor means that the five-seater has extra room inside, as well as a big boot - something that bulky batteries in electric cars sometimes prevents. There aren't any hard details on the Ampera-e just yet, but as it's likely to share a lot with the Bolt we can expect somewhere around 480 litres of boot space.

Equipment in the Chevy Bolt includes a 10.2-inch touchscren display, sat-nav, hand gesture recognition and even Spotify functionality for your music. Apple CarPlay and Android Auto will also be in use on the Bolt, so expect to see them on the Vauxhall version, too. Vauxhall has also confirmed that its OnStar tech will be present on the car, which allows drivers to connect to a call centre to get help with anything they need on the road.

Opel group CEO Dr. Karl-Thomas Neumann said: “Electric vehicles have the potential to make a significant contribution to climate protection and emissions reduction. The new Ampera-e will open the road to electric mobility by breaking down the barriers of high price and short driving range.”

There's no word on a price for the car yet, but in the US the Chevy Bolt will cost $37,500 which is about as much as a BMW 3 Series. It's likely to put the car in a price range to rival the upcoming Tesla Model 3, which will be revealed at the end of March.

What do you think of the look of Opel/Vauxhall's new electric car? Let us know below...

Welcome to our Paris Motor Show hub page. Scroll down for all our Paris content...
Vauxhall to resume production at Ellesmere Port site on 17 August