It was last seen flying over Tower Bridge in London, dangling from a helicopter on the eve of the British Motor Show... 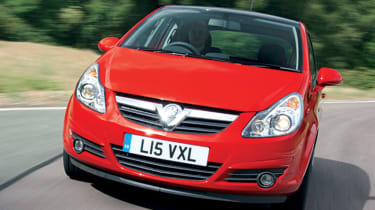 The Corsa looks better than most of its rivals and is well equipped, solidly built and has prices that put some superminis to shame. Weak petrol engines spoil the driving fun and poor visibility is a concern, but Vauxhall’s newcomer is impressive. Bosses are expecting a five-star Euro NCAP crash test rating, which will give the Corsa everything it needs to challenge the supermini class leaders.

It was last seen flying over Tower Bridge in London, dangling from a helicopter on the eve of the British Motor Show. Vauxhall’s new Corsa had finally landed in the UK – and made quite an entrance, too.

Now, with all four tyres firmly on the ground, we’ve taken the wheel of all the variants that will make up what Vauxhall hopes will be a class-leading line-up.

The range arrives in October, offering a choice of six engines, five trims and two body shapes. Vauxhall is confident the three-door will take the majority of sales, predicting that customers will be won over by its coupé-style looks, even if it does offer less practicality.

It may well have a point, as the three-door has a smart appearance. We were unable to resist the charms of a red, £10,595, 1.4 SXi three-door as it sat crouched on the tarmac, 17-inch alloys filling its flared wheelarches.

Inside, it doesn’t feel quite so sporting. When you’re sitting behind the wheel, the deep dashboard and steeply angled windscreen stretch a long way in front, making the car feel like a supermini-MPV. Front three-quarter visibility is poor, thanks to thick front A-pillars, while the small quarter light windows don’t really help.

Performance from the 89bhp 1.4-litre engine is fine going downhill and acceptable on the level, but even moderately steep climbs manage to suck the life from it. The five-speed manual gearbox and brakes feel good, but the pace suggested by the Corsa’s sporting looks just isn’t present. There are two other petrol engines to choose from – a 59bhp 1.0-litre and 79bhp 1.2-litre – but while they both return excellent fuel economy, the bad news is that these two units offer even less pace than the 1.4-litre car.

If you want to have fun, forget the petrol units and take the diesel route instead. Until a hot VXR version arrives next summer, the most powerful engine available will be the 123bhp, 1.7-litre CDTI, which claims 58.8mpg. Unlike the 1.4-litre petrol, the oil-burner’s performance is strong, punchy and consistent right through the rev range. The 1.4-litre model gets from 0-60mph in 11.8 seconds, but the diesel does the job in 10 seconds – and it’s definitely more entertaining to drive.

Sadly, we didn’t warm to the SXi’s sports suspension. The cobbled streets on our test route would be a challenge for any car, but even on smoother tarmac, the Corsa never felt truly settled or completely comfortable.

However, there’s no faulting the handling. With excellent high-speed stability, motorway driving is no problem. The Corsa also proves its worth on twisty roads, where it can negotiate hairpin bends with precise, sharp turn-in and minimal body roll.