While the three-door Corsa has the looks, buyers who need space and practicality need to know what the five-door has to offer 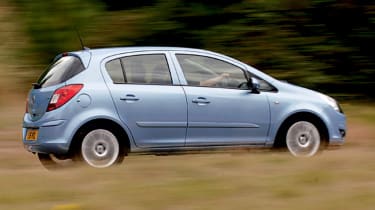 The Corsa looks better than most of its rivals and is well equipped, solidly built and has prices that put some superminis to shame. Weak petrol engines spoil the driving fun and poor visibility is a concern, but Vauxhall’s newcomer is impressive. Bosses are expecting a five-star Euro NCAP crash test rating, which will give the Corsa everything it needs to challenge the supermini class leaders.

While the three-door Corsa has the looks, buyers who need space and practicality need to know what the five-door has to offer.

In the metal, this model doesn’t have the same sporty appearance, but the extra doors make it a better bet for young families. As in the three-door, rear headroom is good, although leg space in the back is no match for the Renault Clio.

The boot is ample, if not the biggest in the class, and while the seats don’t fold flat, the height-adjustable floor allows you to store items out of sight.

Spend an extra £500, and you can equip your Corsa with the clever FlexFix system. The number plate bracket slides out from the rear of the car to carry bikes safely and securely. The only downside is that the spare wheel is moved into the boot, limiting capacity, or is replaced with a can of foam.

Cabin stowage is reasonable, and the central dash layout is similar to the bigger Astra’s. But whether you choose the three or five-door, build quality is excellent. Vauxhall also appears to have borrowed inspiration from the Mitsubishi Colt, as Design and SXi models feature glowing translucent controls.

As well as the 1.7-litre oil-burner, Vauxhall also offers a 1.3-litre diesel. It’s available in two states of tune, 74bhp and 89bhp, although fuel economy is the same for both, at 61.4mpg. We tried the more powerful version of the 1.3, and while it’s slower and a little less refined than the 1.7-litre engine, it is still our pick of the range.