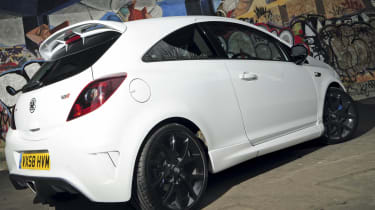 There’s nothing subtle about the Corsa VXR, and the Arctic Edition takes it a step further! The white paint and black alloys turn heads, as does the race car exhaust. There’s bags of low-down torque, but the front tyres spin too easily out of bends. Plus, you could buy a more desirable Abarth 500 Esseesse or a more fun Clio 197 for less.

With its frenetic turbocharged engine, the Corsa VXR always had a reputation for being the wildest car in its class. Even so, Vauxhall has upped the ante with a white-hot limited-run model, called the Arctic Edition. And with only 500 examples to be produced, it’s as rare as a polar bear in spring.

Those who aren’t keen on the standard car’s in-your-face looks are unlikely to warm to the Arctic’s monochrome colour scheme. This styling doesn’t just grab your attention; it slaps you around the cheeks. The Glacier white paintwork is highlighted by gloss-black 18-inch V-spoke alloys, plus a black roof and wing mirrors. Elsewhere, it’s the usual VXR combination of bulging side sills, a deep front apron and prominent rear boot spoiler.

If the bold exterior doesn’t get you noticed, the noise from the Remus sports exhaust will. Developed by Triple Eight Engineering, the team behind Vauxhall’s British Touring Car Championship racers, the system gives a low rumble at idle that builds to a snarl on full throttle, with pops and bangs on the overrun. After that assault on the senses, the ageing interior is a letdown. The shiny black plastic and branding look cheap, while the switchgear feels flimsy. Still, the Recaro bucket seats provide just the right amount of support in corners and prove surprisingly comfortable on long trips.

Put your foot down and the 1.6-litre engine responds immediately, with lots of power available from low revs. And while the extra bhp unleashed by the exhaust doesn’t improve the Corsa’s performance, that soundtrack certainly impresses. A quick, direct steering rack sees the model dive eagerly into corners, but any more than half-throttle when exiting them will overwhelm the front wheels. The Corsa VXR remains a love it or hate it kind of car, but the Arctic Edition has clearly added even more excitement.

Rival: Renaultsport Clio With one of the sweetest chassis of any hot hatch, the Clio 197 loves corners. The engine delivers all its power at high revs, so it needs to be worked hard. However, all this comes at a low £15,995 price.