Cut-price motoring and attractive styling are key to supermini’s appeal. 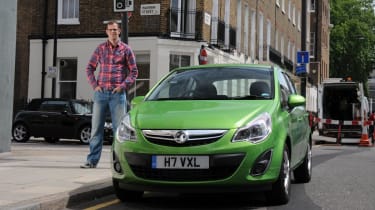 There’s nothing like beating the system to make you feel good – and that’s especially true when it helps you slash your motoring bills. Take our new long-term test Corsa as an example.

With its sub-100g/km CO2 emissions, our eye-catching green machine is not only exempt from the London Congestion Charge, but it also won’t cost a penny to tax. And with claimed fuel returns of 78.5mpg from its 1.3-litre CDTi engine, the Vauxhall should  also save us cash at the pumps.

Before benefiting from free entry to the capital you need  to fill in a special form, which  you then send to Transport  for London (TfL) with a £10 administrative fee. The organisation claims that you’ll  get confirmation of your car’s exempt status within 10 days. However, we ended up waiting a whole four weeks before getting the green light, during which time we forked out a small fortune on the daily charge!

Still, even this setback hasn’t stopped me enjoying the latest addition to the Auto Express fleet. The bold metallic Lime Green finish really turns heads, while our car comes loaded with kit, thanks in no small part to the addition of the Exclusiv Plus pack. This £515 option adds 15-inch alloy wheels, front foglamps, cruise control and a trip computer. On top of this, we’ve also added the £750 Touch & Connect system, which brings sat-nav, Bluetooth and a USB port for connecting external music devices. The downside is that all these have increased the Corsa’s price to an eye-watering £17,600.

The expense isn’t the  only issue, either. While the touchscreen display for the sat-nav is relatively straightforward to use, it is mounted low in the dashboard, meaning you have to take your eyes off the road when you want to use it or check route-finding directions.  Further criticism is reserved  for the Corsa’s gruff 1.3-litre engine, which is noisy at idle  and equally intrusive at a cruise. On top of this, the unit feels sluggish at low speeds. Only when the needle on the rev counter climbs above 2,000rpm is the Vauxhall capable of  keeping up with faster traffic.

At least the ecoFLEX’s standard stop-start function works well. During my daily commute into London the system is constantly being called upon, shutting off the engine as soon as I roll to a halt, and firing it up again the instant  I dip the clutch pedal. There’s no doubt it has played a part in the car’s excellent 51.0mpg return.

And it’s in the urban jungle where the ecoflex feels most at home, its compact dimensions and light controls making it the perfect choice for nipping along crowded city streets. It puts in a decent performance out on the open road, too. It’s not as poised and agile as, say, a Ford Fiesta, but the direct steering and decent grip mean the Corsa is fine  for my daily commute.

So, on first impressions, our newcomer is something of a mixed bag. I sense that in the coming months the Vauxhall’s charms will begin to grow on me. And if they don’t, I can always revel in the financial savings...