Excellent fuel economy has posed an unlikely problem for our products writer... 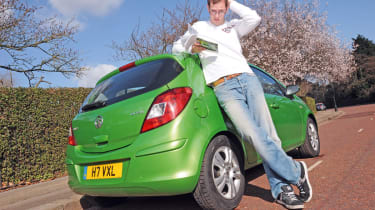 6
I’ve been forced to dig out the handbook for our Vauxhall Corsa. Our bright green machine is so fuel-efficient that I hardly ever need to visit a filling station, and often forget which side the filler cap is on.
At the moment the fuel-sipping ecoFLEX is returning 48mpg, which means I’m travelling a huge 500 miles between fill-ups. When I do eventually need to top up with diesel, I tend to drive slightly past the pump, just in case I’ve pulled up at the wrong side and need to stretch the hose around the car.
I wish Vauxhall would put a little pointer on the fuel gauge as a reminder of which side the filler is on – I’ve been in plenty of cheaper cars with this handy hint, and it’d make life easier.
Still, the huge range has meant I’ve spent a lot of time driving the Corsa up and down the country to visit family and attend various product launches. And not even a blast of wintry weather could stop me, as the Corsa’s ContiWinterContact tyres helped keep me moving through the ice and snow. Now that temperatures are rising, I’ll get the summer tyres put back on – it should only cost around £50 at my local fast-fit centre.

I’m hoping the switch makes the car more fun to drive. The Corsa is fine on the motorway stretch between my house and the office, but on a twisting back road it struggles to live up to Vauxhall’s ‘Put the fun back into driving’ marketing slogan. The diesel engine is gruff and sluggish, the tall ratios in the gearbox are set up for maximum economy and the handling isn’t at all sporty. Our petrol-powered VW Polo is more fun to drive.
Making matters worse is the car’s uncomfortable driving position. There’s plenty of adjustment in the seats and steering wheel, but the seats don’t provide enough support. And because I’m 6ft 7in, my head scrapes the ceiling.
Another problem is the Bluetooth hands-free system, which has started playing up. Callers have reported a loud crackling sound when I’m on the phone. The Corsa’s due its first service shortly, so I’ll get this looked at.
Still, it’s not all bad news. A recent spring clean has helped show off the car’s £495 Lime Green paint in all its glory. I’ve not seen another Corsa in this colour, so it really stands out.
What’s more, with a few months left before I hand back the keys, I’m dreading the thought of a replacement that isn’t as clean and green as the Vauxhall. I’ve been spoilt by its fuel economy, while the sub-100g/km CO2 emissions mean I avoid paying road tax and London’s £10-a- day Congestion Charge, which is handy when your offices are in the heart of the capital.
As a cost-cutting commuting car, the Corsa has few equals. And while it’s not fun to drive, I’d rather spend hours behind its wheel than standing on a filling station forecourt. Now, will it be under ‘F’ for filler, or ‘P’ for petrol cap..?

“The fuel economy is great. It’s nice to hear the pump click off after putting only a few litres in after a long trip. Shame it doesn’t impress so much elsewhere.”Luke Madden, Web reporter

“There are cheaper supermini options than the Vauxhall Corsa, but none is nearly as well built. At the end of the day, you get what you pay for.”dastardly01, via www.autoexpress.co.uk