Clearly not a full-sized family car, the Corsa is nonetheless comfortable and quite practical transport for five people

As the Corsa hasn’t changed shape or size, practicality remains unaffected but that’s no bad thing as the supermini has always been rather spacious – more so than the Ford Fiesta, especially at the rear.

The wide rear bench makes this a genuine five-seat car for adults, in both the three- and five-door versions, but the long doors of the former make getting in and out quite difficult. The five-door is the one to go for if you’re using the rear seats a lot.

There’s a fair amount of interior storage, with door pockets capable of carrying a 1.5-litre bottle – though there’s no box in the centre console between the front seats, and the glove box is on the small side.

The driver will find it easy to get a good driving position in the Corsa because there’s plenty of seat and wheel adjustment and, vitally, the pedal placement is good – there’s a sizable left footrest for your size 11s.

All occupants will find the latest Corsa largely comfortable, with its all-new suspension setup tuned for the potholed roads of the UK. It’s especially supple around town at lower speeds – where Corsas will generally spend most of their time. And while this translates into a little bounciness on the motorway, this is generally a settled, comfy car.

The Corsa is available in either three- or five-door body styles, with no difference in overall length or height between the two; the three-door Corsa’s more coupe-like look is a trick of design.

Cars like these are designed to be nippy around town, capable of darting in and out of traffic, and parking comfortably in small spaces. The Corsa excels in those respects, although visibility seems limited compared to what you get in the new breed of supermini-based crossovers (such as the Vauxhall Mokka X, for example) that sit drivers much higher up.

The Corsa is longer, wider and lower than the Ford Fiesta, but only by a few millimetres in each direction, which means that in reality it feels the same size. 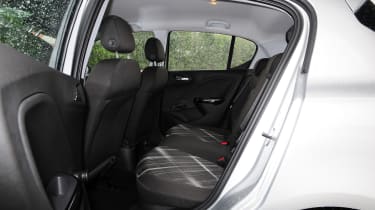 Vauxhall has packaged the Corsa’s interior very well, meaning headroom and legroom in the rear is excellent for the class – tall adults will be ok in there. Plus, you’ll actually be able to use the two standard rear Isofix child seat mountings without having to push the front chairs all the way forward. 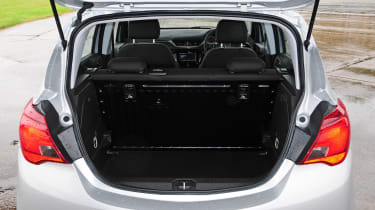 The 285-litre boot sits right between the VW Polo and Ford Fiesta in terms of capacity, but the high boot lip can make loading items a little tricky. The rear bench is only 60/40 split as standard on the top SE and Elite models (it's an option on other models) and doesn’t fold completely flat, so you’re left with a loading area that isn’t too well designed.