The Corsa is better to drive than ever, and among the confusing array of similarly powered engines, the new three-cylinder unit really stands out

The looks may be familiar, but Vauxhall has re-engineered a substantial proportion of the Corsa’s running gear to ensure it can compete with the Fiesta when it comes to driver engagement. Sadly, the truth is that it still can’t quite match the Ford – but it’s closer than ever.

Underneath, the basic platform from the previous-generation Corsa has been carried over, but Vauxhall has bolted on a new suspension setup, which improves the ride considerably and gives better body control.

The importance of the UK market to the Corsa’s success has prompted Vauxhall to set up the suspension and steering specifically for our roads, rather than simply take the settings from the equivalent Opel. So, while it still feels a little nervous on the motorway and slightly juddery at times, it makes up for that with fast responses on twisty roads.

Just as importantly, the suspension soaks up low-speed bumps well – a little better than the Ford Fiesta, even. Turn-in is quick, there’s plenty of grip, and while a little body roll is present, the Corsa generally feels stable and sure-footed. 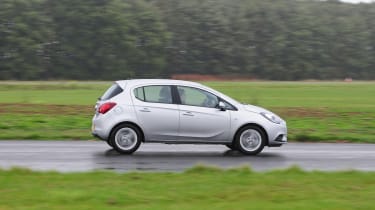 Around town, the City steering mode (standard on every model) makes the wheel extremely light for parking, and it disengages at speeds above 30mph to deliver a more natural feel – although there still isn’t a great deal of feedback to tell you what the front wheels are doing.

There’s more of a feeling of quality and solidity in this Corsa than ever before – the gearbox has more heft despite still being very light through the gate, for example. We’d avoid the Easytronic automatic gearbox, though – it’s an automated manual, rather than a full automatic, so while it doesn’t have a negative affect on fuel economy, it does make the car less enjoyable to drive, with slow and jerky changes.

The Corsa’s previously large and confusing engine range has been chopped down over the years; diesel power is now absent and there are just two petrol engines to choose from.

Both are naturally aspirated 1.4-litre units and they share a similar character, with either 74bhp or 89bhp.

Previously, Black Edition Corsas came with a 148bhp version of the 1.4-litre turbo, which is notably stronger than the 98bhp version, naturally, and negates the need to stamp on the accelerator when going up hills or overtaking. Its 220Nm of torque helps the Corsa to a 0-62mph time of 8.9 seconds. 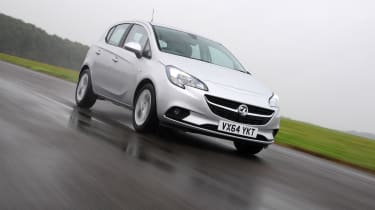 The discontinued 1.3-litre diesel was the most frugal engine in the Corsa, but it feels heavier in the nose. It was available in two power outputs, 74bhp and 94bhp, both with 190Nm of torque. With 14.8 and 11.9-second 0-62mph sprints respectively, they’re not built for high performance and tend to rattle and chug in a manner typical of four-cylinder diesel units.

The 1.4-litre turbo petrol engine in the discontinued GSi propels the car to 62mph in 8.9 seconds. Unlike the VXR hot hatch it replaced the GSi is rather less exciting to drive.