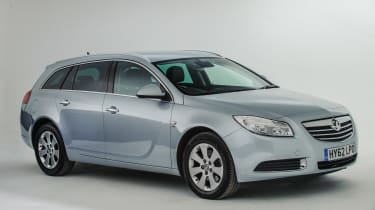 Savage depreciation makes the Insignia a great used buy, as it’s comfortable, well equipped and a fine motorway cruiser. But rivals are more refined and better to drive, and this isn’t the class’s most reliable car. Our Driver Power survey results suggest the Insignia’s star has faded more quickly than Vauxhall would have liked, so it’s clear that more talented rivals are available. But as those alternatives generally cost more – in some cases a lot more – if you’re after a stylish holdall for the family and you’re not worried about impressing the neighbours, the Insignia Sports Tourer could be perfect.

After the underwhelming Vectra, the Insignia was a breath of fresh air. At last, here was a Vauxhall that could take the fight to Ford’s Mondeo, even if it wasn’t a convincing substitute for premium models such as the Audi A4 or BMW 3 Series.

Spacious, stylish and packed with kit, the Insignia was talented enough to take the 2009 European Car of the Year award. And that was just the hatch. The estate – dubbed Sports Tourer by the company – looks even smarter, and it’s much more usable thanks to the extra carrying capacity.

But as with many Vauxhalls, the Insignia sheds its value rapidly, which is why used examples make such spectacular buys. 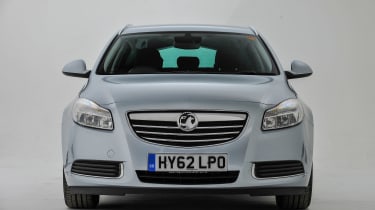 The Vauxhall Insignia replaced the Vectra, with the Sports Tourer model arriving in 2009. Despite a facelift in 2013, it’s still in its first-generation and we’re focusing on that in this review.

A 1.4-litre petrol turbo arrived in May 2011, then a facelift in October 2013 brought new multimedia, improved refinement, plus revised suspension and steering, as well as a 99g/km 2.0 CDTi and a 168bhp SIDI petrol turbo. It also reduced the number of trims. The high-spec Country Tourer 4x4 all-road estate launched at the same time, with a raised ride height. 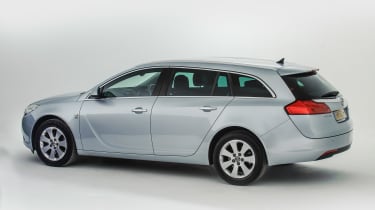 Three-quarters of Insignias have a diesel; the 2.0 CDTi is best in 158bhp form as the 128bhp version isn’t as flexible. If you prefer petrol, the 1.6T makes most sense as it’s zesty but not too thirsty. If you often tow, a four-wheel-drive example is worth seeking out, but you’ll have to search to find one.

In terms of value, the Ford Mondeo is the Insignia’s key rival. As with the Vauxhall, it’s in plentiful supply, plus it’s cheap, well equipped and generally reliable. It’s much more fun to drive, though, while the cabin has more character. The Honda Accord is stylish, reliable and good to drive, and it’s less common than the Mondeo, too.

Arguably the best all-rounder in this class is Skoda’s Superb, which always does well in our annual Driver Power satisfaction survey. Owners say they love its reliability, practicality and driving dynamics, while it’s also well equipped and offers some excellent engines. In addition, think about the Peugeot 508, Citroen C5 and Renault Laguna; all provide superb value.

Some early diesel-engined Insignias can suffer from power-steering fluid leaks. Dealers know of the problem, but no recall was issued. 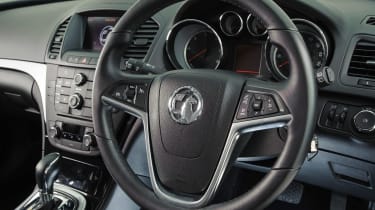 All sorts of electrical glitches can crop up, including the dashboard displays and/or illumination switching off. However, such issues are unpredictable.

On some cars the rear brake pads can bind. The pads have since been redesigned, but any car with older parts may be suffering from binding brakes.

Some owners have found that their cars judder or appear to misfire at high speeds; adding some Redex to the fuel tank periodically can fix the problem.

The dash is attractive and well laid out, while the seats have an unusually wide range of adjustment. For even greater comfort, find a car with the optional Ergonomic Sports Seats. Rear space is generous, but the boot – which expands from 520 litres to 1,460 litres with the seats folded – trails class rivals’. 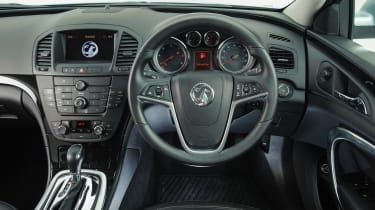 All Insignias need to be serviced every 12 months or 20,000 miles. The checks alternate between minor and major, costing £149 and £199 respectively, regardless of which engine is fitted (although this excludes the VXR). 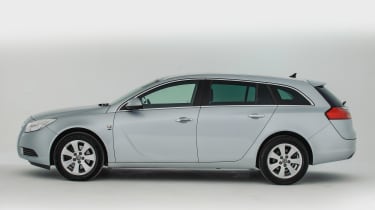 The Insignia’s been recalled twice, the first in November 2010 because of a problem with the steering wheel-mounted airbag. In some cases it didn’t deploy correctly; 9,000 cars were affected. In January 2011, nearly 1,300 Insignias were recalled because the electric window anti-trap function could fail, leading to trapped fingers.

In both cases, Vauxhall couldn’t give us build dates of the cars affected. However, any dealer can tell you whether or not any potential buy would need to have work done, and this would be carried out for free.