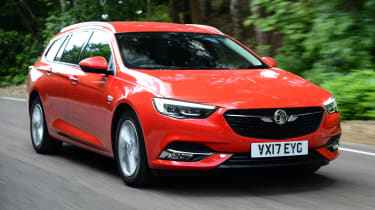 Despite its sleek styling, the all-new Vauxhall Insignia Sports Tourer can now challenge the biggest and best cars in this class for outright space. This latest version rights many of the old model’s wrongs by prioritising practicality, matching its massive boot and rear seats to a well built and generously equipped interior. It’s not as sharp to drive as a Skoda Superb or as luxurious as a Volkswagen Passat, but whichever way you look at it, the Insignia Sports Tourer is among the best-value new cars money can buy.

Although we drove the new Vauxhall Insignia Grand Sport back in March, first deliveries aren’t expected until the end of this month. However, before the hatchback officially arrives in the UK, we’ve been given an opportunity to try its more practical Sports Tourer estate sibling.

As before, the range will comprise two models. After the slow-selling saloon was dropped during the outgoing car’s mid-life facelift, the hatch and estate continued, appealing to cost-conscious company car drivers and private buyers looking for maximum space, low running costs, generous standard kit and a stylish body.

The first thing that strikes you is how huge the new car looks. At almost five metres long, the Vauxhall is 125mm longer than a Skoda Superb Estate. The Insignia feels quite cumbersome around town, especially in tight spots and when parking. 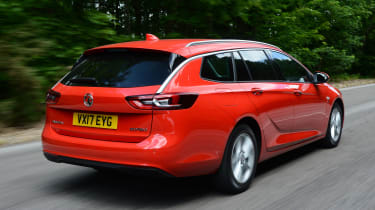 But even on the open road it feels as if you need to squint to see the rear screen, which stretches way back behind the rear seats. But the benefit of that added length comes when you look at the raw numbers. The designers have rectified the old car’s failings by focusing primarily on practicality – making this the biggest Insignia ever.

The previous Sports Tourer was criticised for its swooping roofline, which had a noticeably detrimental effect on the car’s load space. But despite retaining a dynamic profile, the new model boasts a 1,665-litre boot – 135 litres larger than before.

This means that while it’s down on the huge Superb (1,950 litres), it trumps the Ford Mondeo Estate’s 1,605-litre cargo area. The Vauxhall’s rear seats fold electrically via a pair of boot-mounted buttons, revealing a flat load bay big enough for most needs. 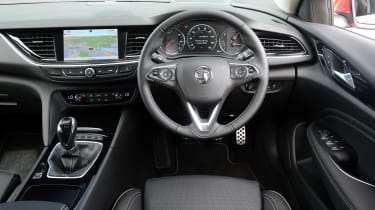 Space in the rear is also impressive, with near-Mercedes S-Class levels of legroom, as well as plenty of headroom. Practical touches such as the big central storage compartment, covered cubbies and decent door bins remain. Material quality is good, and considering entry-level cars cost less than many top-of-the-range superminis, there’s little to complain about from the driver’s seat. Neat touches, such as the ledge below the touchscreen to rest your hand, as well as smart climate controls and easy-to-read dials, are unchanged from the Grand Sport hatch. A Volkswagen Passat has the edge for perceived quality, but by less of a margin than you might imagine.

The engine line-up mirrors the hatchback range, with two 1.5-litre turbo petrols, 1.6 and 2.0-litre diesels in various guises, and a flagship 2.0-litre petrol 4x4 with 257bhp. A long-throw, six-speed manual gearbox is standard, while certain combinations can be had with an eight-speed automatic.

As with the hatch we drove previously, our car had the refined 1.6-litre ecoTEC diesel engine. With 134bhp, the Sports Tourer sprints from 0-60mph in 9.9 seconds and feels pretty punchy on the move. There’s loads of in-gear shove, and you’re rarely left wanting for any extra power.

The tall sixth gear makes this a capable motorway cruiser, with Vauxhall claiming 62.8mpg and CO2 emissions of 119g/km. That puts it in the 25 per cent Benefit in Kind (BiK) tax bracket for company car drivers (including the three per cent diesel surcharge), which is one percentage point higher than a similarly powered Superb 1.6 TDI. The Insignia estate is a great-value proposition for growing families.

While the majority will lease their Sports Tourer, the basic car’s £18,685 list price is hard to ignore and this new version is even more lavishly equipped than the old model. 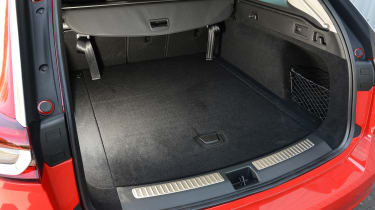 Even the most basic Insignias get Vauxhall’s OnStar services, LED running lights and a touchscreen infotainment system, as well as keyless entry, cruise control and 17-inch alloy wheels. A comparable Superb in SE trim would cost around £5,000 more – a big penalty even over a 24 or 36-month PCP deal.

The Insignia handles neatly, feeling very similar to the hatch from behind the wheel. Body control is good, and the well judged suspension soaks up lumps and bumps around town. It’s a little fidgety at higher speeds, but on the whole it’s well behaved, with light but direct steering and plenty of grip. It’s nimble enough for most drivers, in fact, although a Mazda 6 Tourer is ultimately a more rewarding car to drive.