With a 6.2-litre V8 generating 537bhp, does the Vauxhall VXR8 Maloo pick-up make any sense in the UK? 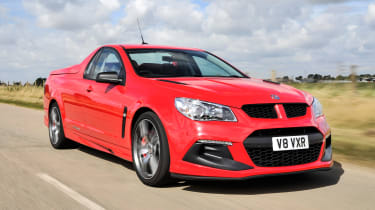 The Vauxhall VXR8 Maloo makes no sense in the UK, or anywhere for that matter. That said, we’re still glad it exists. This is a pick-up truck that sticks two fingers up to conformity by shoehorning a frankly absurd 6.2-litre V8 under the bonnet and a six-speed manual gearbox between the front seats. It’ll hit 62mph in 4.6 seconds and 18.5mpg economy means it’ll cost you a fortune to run, but the three-year, 60,000-mile warranty is the same as you’ll find on your neighbour’s diesel Astra.

Pick-ups are big business in Australia. One of the most popular is the Holden ute, which parent company General Motors has been building in one form or another since the 1950s. It comes with a variety of different engines, but perhaps most intriguing of all is the bonkers 537bhp Maloo LSA, which has been made available in the UK badged as a Vauxhall in VXR8 guise.

Under the bonnet sits a 6.2-litre supercharged V8 with a frankly ridiculous 671Nm of torque. It’ll do 0-62mph in 4.6 seconds and hit 155mph on a stretch of deserted, derestricted tarmac. These numbers cement the Maloo’s place as the fastest commercial vehicle on the planet – and it takes just mile or two to understand what that means. 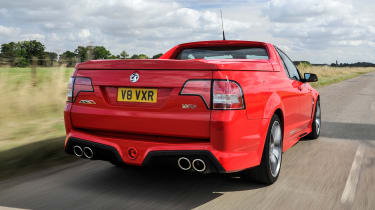 On start-up, there’s none of the diesel clatter usually associated with a pick-up. Instead, you get a sublime burbling V8 soundtrack not dissimilar to that in an AMG Mercedes. Pleasingly, our car came fitted with the standard six-speed manual gearbox, though an auto is available as a £1,700 option.

Throttle response is instant. Unlike more conventional pick-ups, the Maloo is rear-wheel drive only and can prove quite a handful in greasy conditions. The fact that there’s no weight over the back axle makes it really rather lively, in fact. Act too hastily on the exit of a corner and the tail will push wide, with the traction control light flickering in desperation as the systems try to contain all that power.

Holding onto the gears is a riot, with a fierce exhaust note right through the rev range. That huge lump of torque means you needn’t switch ratios unnecessarily, either, picking up speed from impressively low revs. Let it past 4,500rpm and the VXR8 comes alive – singing to the red line like few cars and no pick-ups can.

• How to save fuel in a Vauxhall VXR8 Maloo

But that’s where the fun ends. Plumbing such a huge engine into any car or truck is going to result in alarmingly high fuel consumption. Vauxhall claims a paltry 18.5mpg – and while we managed 27.5mpg in this year’s MPG Marathon, it’s unlikely you’ll see more than 200 miles from a tank. 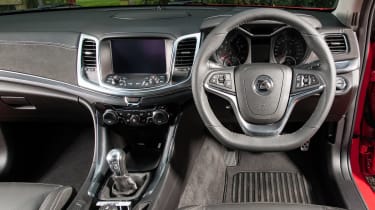 Furthermore, the 500kg payload limit means this isn’t going to trouble a Mitsubishi L200 for carrying capacity, and off-road ability is close to nil. That intricate load cover is supposed to aid aerodynamics, but overall it does more harm than good – severely restricting rear visibility.

Much of the interior and switchgear is lifted from other models in the Vauxhall range, with a similar array of buttons to those you’d find in the outgoing Insignia. The central screen is old fashioned, with the dated graphics feeling a little old hat alongside more modern Vauxhall products. It’s also the only model in the brand’s range not available with the innovative On Star services, which is a shame.

However, GM bringing the Maloo to the UK with a Vauxhall badge allows the Luton-based carmaker to offer the ridiculous V8 ute with a three-year warranty. That’s 60,000 miles of stress-free motoring – the same as you’ll get on a new Astra diesel.