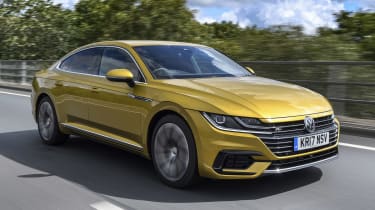 Despite not acting as a direct replacement for the now-defunct CC, the Arteon fits its bill as a worthy flagship in VW’s ever-expanding range. It’s beautifully designed, impressively refined and has a good enough drive, while the long kit list should satisfy those after a desirable and well-equipped company car. A Passat does much of this for a lot less, but can’t come close when it comes to style and sophistication.

The car you see here is not a Passat. Nor is it a successor to the old CC. Volkswagen considers the Arteon an all-new car, in fact, and a rival for sleek D-segment saloons like the BMW 4 Series Gran Coupe and Audi A5 Sportback.

It’s launching at an extremely busy time for VW, just after the revised up! and Golf, and ahead of the all-important Polo supermini and T-Roc SUV. But while the maker has fairly modest sales targets for the Arteon, its introduction pushes Volkswagen into unknown territory. The flagship four-door will act as a halo product for the brand, attracting new customers to its ever-widening range of cars.

There’s no arguing with the way it looks. It’s certainly more distinctive than the three-box shape of the current Passat, while its low roofline and wide stance will give BMW’s designers something to worry about. At 4,862mm long and 1,871mm wide, it’s 95mm longer and 39mm wider than a Passat saloon. In R-Line spec as tested here, it looks infinitely more aggressive than the soberly styled Jaguar XE. 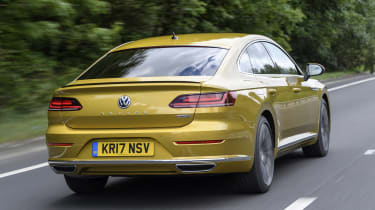 On sale now, the Arteon will initially launch with a choice of two petrol and two diesel engines, with additional units scheduled for release later down the line. For now, all models use VW’s tried and tested seven-speed DSG gearbox, though a manual is due in the not too distant future.

While the range-topping 276bhp 2.0 TSI will sprint from 0-62mph in just 5.6 seconds, it’s the more popular 148bhp 2.0 TDI diesel we’re trying here for the first time. Basic models like ours are powered via the front wheels, though 4MOTION all-wheel drive features further up the range and is standard on top-spec cars.

Dynamically, the Arteon is best described as safe rather than super sharp, though switching to Sport mode (our car featured VW’s £820 DCC adaptive dampers) helped keep body roll in check. The ride does suffer slightly as a result, however, meaning we ended up keeping the car in Normal or Comfort more often than not. 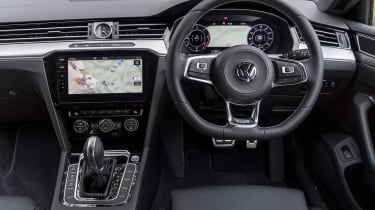 There’s not much feel through the steering, either, though the responsive gearbox swaps cogs quickly and smoothly. A BMW 4 Series is unquestionably more responsive, but the Arteon strikes a decent balance between ride comfort and handling.

The tried and tested 2.0-litre TDI diesel engine should suffice for most buyers, too. It has more than enough mid-range torque for quick overtakes, while also returning a respectable 62.8mpg. The equivalent A5 Sportback sits in a lower company car Benefit-in-Kind tax bracket, though.

In addition to the entry-level car, we tried the 237bhp Bi-TDI diesel and range-topping 276bhp TSI petrol, and while both are considerably faster on paper, the cheaper version never feels sluggish. The Arteon as tested here will sprint from 0-62mph in 9.1 seconds and hit 137mph flat out.

But where this car truly excels is on the motorway. The Passat on which it is based was already a fine long distance cruiser, and the Arteon’s slippery shape only emphasises its high-speed refinement. Our car featured VW’s Acoustics Pack, which adds laminated side glass and tinted windows for £535. The total lack of vibration at idle suggests even standard models should remain remarkably hushed, however.

Other key options include the £895 Discover Pro infotainment setup and £935 panoramic roof. The latter is particularly worthwhile in R-Line cars, which can feel quite dark inside due to the black headlining. 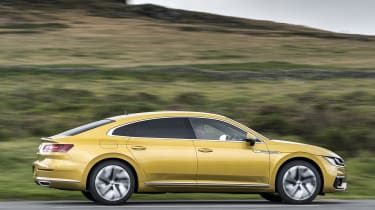 But standard kit across the range is good – as it should be when you consider the near-£5,000 premium Volkswagen is asking over the equivalent Passat saloon. There are two specs to choose from (Elegance and R-Line) and every Arteon gets VW’s Active Info Display, leather seats and three-zone climate control. LED self-levelling headlights, and GPS-aided adaptive cruise control are also included, while R-Line adds 19-inch wheels and more dynamic styling for around £785. Of course, all these extra costs can be absorbed on a monthly PCP plan.

But while the Arteon can trump the Passat for gadgets and gizmos, it feels much smaller inside. The sloping roofline harms rear-seat practicality, and although the long wheelbase means there’s loads of leg space, taller adults will struggle for head room. The big 563-litre boot is 23 litres down on the Passat saloon’s, though the hatchback tailgate should help when loading larger items. The rear seats fold, too, revealing a decent 1,557-litre load bay.