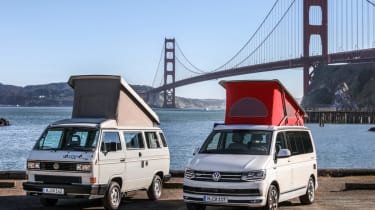 If you’ve always fancied taking an exotic road trip in a faraway location, it’s more than likely the idea of a Volkswagen camper van, the Wild West and southern California beaches has crossed your mind. Unoriginal perhaps, but maybe no vehicle quite captures the essence of lush So-Cal campsites and highways stretching as far as the eye can see as the VW camper.

It’s a great outdoor institution, and one celebrating an anniversary of sorts this year. Volkswagen’s iconic Type 2 Transporter arrived in the fifties and is synonymous with sixties Californian counter-culture, but 2018 marks three decades of the sleeper van wearing its California badge.

To celebrate the occasion, we took the latest version on a three-day tour around the south of its namesake state, to see if the cliché Californian road trip lives up to the hype. Firstly, where did the California name come from? Prior to 1988 you wouldn’t find it on any VW van, and nor was it the firm’s brainchild. Westfalia-converted T3 generation vans, T25s to UK fans, take that honour, with the California name attached to an updated version of the Westfalia Joker, produced since 1979.

The California was aimed specifically at summer campers and available with a pop-up or high-top fixed roof. A sister van, the Westfalia Atlantic, was designed with year-round outdoor pursuits in mind. At launch, the 1988 California had a 39,900 deutschmark price tag (around £17,000 in today’s money) after tax in Germany for the most basic version, with a 77bhp, 1.9-litre petrol engine.

Buyers could only choose between red or white paintwork, but the van came with two beds, one in the roof, the other folding out from the rear bench, and amenities including a double-burner hob, sink and fridge combination. Despite the name, the original California was never sold in the United States – the American-spec model was called the Vanagon.

Its absence from the US market has continued through full Volkswagen ownership of the California name, too, starting in 2003 with the first full in-house effort and right up to the present day with the latest model based on the current-generation T6 Transporter. It seems odd that a vehicle so attached to West Coast road trip culture isn’t even available to buy there. 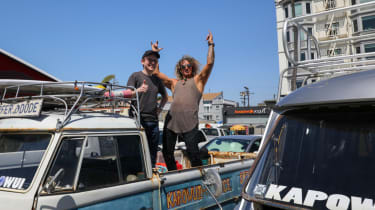 Volkswagen doesn’t sell any vans at all in the United States right now, be it of the commercial or camper variety. However, the locals know the score. Straight off the plane at Los Angeles International and our brand new, temporarily imported German-spec California Ocean van is causing a stir, and within minutes a potential sale for Volkswagen has slipped by.

The first Californian to have a proper rummage around the California loudly declares that he’d import one permanently, if US laws allowed it or if VW built it for the country. This proved to be a recurring theme during our near-350-mile round trip; a loop taking us up and along the west coast from Los Angeles, inland into vast, desert-like plains, before heading back down into the city.

As we roll out of the airport and straight into the concrete tangle of central Los Angeles’ huge web of highways, our first port of call is Venice Beach, where our brand new California meets some of its earliest ancestors. Surf instructor Martin has brought two of his Type 2 T1 split-screen vans to the beachfront for an impromptu family reunion. 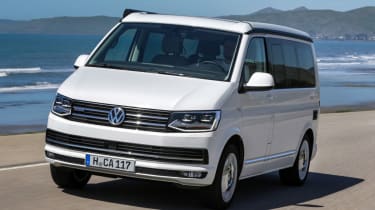 Having the original and latest models parked side by side reveals the staggering growth of the Transporter over the years, and the new van completely dwarfs the iconic version. The T6 is nearly five metres long, the fifties and sixties van just over four metres thanks to its tiny overhangs. It must be said that Martin’s pride and joy, his T1 Single Cab pick-up, is heavily modified.

Lowered and dressed with trademark surfer trinkets and stickers, it looks very much at home at Venice Beach. As we leave LA, a few hours on California State Route 1 and US Route 101 await. There are several highways out of the north west of LA, but these coastal roads heading up past Malibu are probably the best. State Route 1 tucks up to the coast and we’re not surprised that it’s busy leading out of the city.

With traffic lights for the first few miles, there’s plenty of stop-start traffic and the California draws attention. Every other stop, the driver of the car in the next lane is winding their window down and asking a question. The traffic eventually thins out and it’s hardly a tiresome highway cruise thanks to the scenery. The van is doing its bit, too. 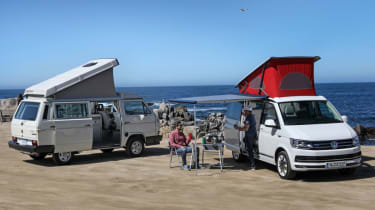 While diesel versions pack more grunt and will deliver far more impressive figures than the 18mpg shown on the trip computer, our 201bhp 2.0-litre TSI petrol model is quiet and smooth, and the massive, comfortable driver’s seat is positioned behind a very car-like dashboard. Our first camping spot, on the coast just south of Santa Barbara, allows us to line up the newcomer with the original for a photo opportunity.

It also provides the opportunity to have a real play with the Aladdin’s cave-like amenities available on our van. Getting set up for the night is pretty straightforward. Electrically powered features such as the pop-up roof are controlled via a panel above the rear-view mirror. It’s not completely idiot-proof, but a minute of pressing the buttons should set you on your way.

Folding out the bed in the main cabin is a journey of discovery the first time you do it, but once is enough to learn. Alternatively, the top bunk is ready to go the moment the roof is pitched, and it’s bigger. The California feels upmarket inside. The materials, fixtures and fittings are excellent, although for the money the full ‘glamping’ experience is the very least you should expect.

A basic California Beach starts at £43,295 after VAT, but our full-fat Ocean model, with its fitted kitchen and a seven-speed DSG auto box, is £58,109. It’s very much Mercedes Marco Polo territory, but it certainly feels premium enough to compete. Our second day takes us inland to more arid parts of the state and the amazing California State Route 33.

This cuts through Los Padres National Forest, and serves up an all American mix of road. Heading north out of Ojai, it twists through the greenery of the national park, but rapidly climbs and transforms into a dry, orange mountain pass for around 50 miles. At this point the sheer weight of the California and its trappings become an unavoidable fact. 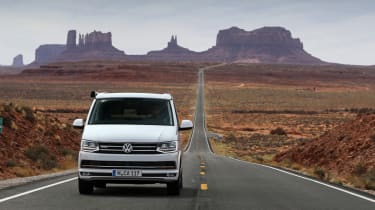 At just over three tonnes it’s far from the ideal machine for a snaking road like this, so there’s a slight feeling of relief the other side of the canyon when the road straightens out on to flat plains and farmland. It’s here in Ventucopa – population: 92 – where camp number two awaits. Once the sun goes down it’s freezing, and it’s on with the auxiliary heater. The California has two 72Ah auxiliary batteries, and it feels just as much at home here as it did by the hot seafront.

The next morning starts with a slog on the Interstate 5, heading back to LA. Hollywood is aptly the final destination, because the California feels like a star. The locals love it, and a celebrity tour bus driver even stops his work to get a picture with it. Thirty years later, it’s quite clear that the California is still an A-Lister.

Enjoyed this Auto Express feature? Then why not read another one on unmarked police trucks which are being used to clamp down on distracted drivers? 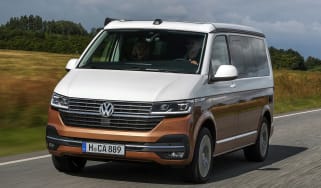 The facelifted Volkswagen California will make its public debut at the Caravan Salon show in Dusseldorf, with fresh styling and new kit