We've been impressed by the Mk7 Volkswagen Golf, but how does it compare to the Ford Focus? 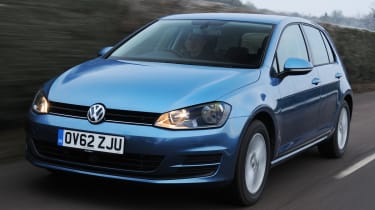 The all-new Mk7 Volkswagen Golf is bigger and better than ever. But is it automatically a class leader? The Ford Focus is still one of the finest family hatchbacks, and one of the best-selling new cars in the UK today. And although it’s not the best-looking Ford ever, it’s a smart and convincing design.

VW has taken its usual conservative approach to styling, and the latest Golf isn’t dramatically different to the old Mk6. But it stands out with its neat detailing, in the flow of the headlights into the grille and the attractive rear end. In contrast, the Focus has been criticised as clumsy in places, particularly with those huge triangular air intakes in the nose.

Climb aboard, and both cars impress. The Focus has more of a premium feel than ever, with its cool interior lighting, soft-touch plastics and high-quality switchgear. There are a few too many buttons on the centre console, but everything feels solidly built.

It goes without saying that the Golf is well made. VW is famed for its interior quality, and the latest hatch sets a new standard with its gorgeous materials and easy-to-use layout. In the centre of the dashboard is a 5.8-inch touchscreen (an eight-inch display is optional), while standard equipment on the most popular SE model also includes Bluetooth, electric mirrors and electric windows all-round. The Focus has a similarly generous kit tally, although owners will have to go for a higher spec to get electric rear windows and cruise control as standard.

Under the bonnet, the Ford stands out with its brilliant new 1.0-litre three-cylinder EcoBoost turbo petrol engines, which mix punchy performance, low fuel consumption and light weight, for better handling. And whether you go for this engine or the 1.6 EcoBoost, or the excellent 1.6 or 2.0-litre TDCi diesels, the Focus is still better to drive. With its agile chassis and precise steering, it’s just a bit more fun.

But the latest Golf has closed the gap. While there could be more steering feedback, the VW handles strongly and predictably, and also has the edge on refinement. The engine line-up is superb, too, ranging from punchy 1.4-litre TSI petrol turbos to torquey 1.6 and 2.0-litre TDI diesels with strong, smooth responses and excellent efficiency.

For now, only Ford caters for buyers wanting to maximise performance rather than economy, with its thrilling 247bhp Focus ST hot hatch. But VW promises to strike back, as the forthcoming new Golf GTI should be great to drive, even if it has less power, at 217bhp.

The Focus trails on boot size, with its cramped 316-litre load bay increasing to only 1,101 litres. The Golf offers 380 litres with the rear seats up and 1,270 litres when they’re folded. But driver and passengers have plenty of head and legroom in both models, plus Euro NCAP has rated the Golf and Focus highly for crash protection. Both cars get ESP and plenty of airbags, and both are available with hi-tech safety options like autobrake, lane departure warning and a self-parking system.

It’s still too early to judge the VW on reliability, but the previous Golf finished eighth in the 2012 Driver Power satisfaction survey. The Focus came 19th, although buyers shouldn’t encounter many problems with either model.

Buyers pay a higher price for the Golf, especially with Ford dealer discounts. But the VW will hold on to its value better. It’s worth the extra, as it’s a brilliant, high-quality all-rounder, although keen drivers will probably prefer the great-handling Focus.