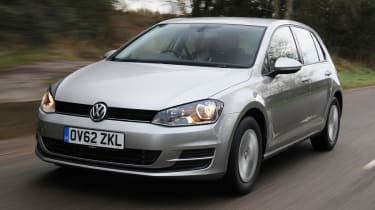 This entry-level Golf offers plenty of kit in a dependable, well built package. It’s good to drive and comfortable – despite its basic rear suspension – and the small diesel engine is very efficient. But for an extra £935, you can upgrade to an SE, with alloys, ‘big-car’ safety kit like autobrake and adaptive cruise control, auto lights and wipers and electric windows all-round.

Volkswagen claims its all-new Golf is better value than before, with more kit, a stiffer, lighter platform and improved engines. So what better way to test that theory than to drive the entry-level five-door, the Golf S?

The base model is easy to spot, as it’s the only version to come with 15-inch steel wheels as standard. It also does without the dome-shaped radar sensor which sits under the front number plate of SEs and GTs because it doesn’t feature adaptive cruise control as standard.

But while the wheels look a bit small, the S model retains the same crisp, if slightly uninspiring, design as the rest of the Golf range. The new car is 13mm wider, 28mm lower and 56mm longer than before, which pays dividends inside, with a more airy feel. There’s extra shoulder room up front and improved leg and headroom in the rear, plus the boot is 30 litres bigger, with a capacity of 380 litres when the rear seats are upright.

The interior has a high-quality feel and is very logically laid-out. Simple tasks like pairing your smartphone with the Bluetooth or switching from FM to digital radio are made easy by the clear 5.8-inch touchscreen, which is fitted as standard.

Under the skin is the VW Group’s new MQB platform, but it’s worth noting that this model and the 1.2 TSI have a basic torsion beam rear axle; all Mk6 Golfs featured a more sophisticated multi-link rear suspension set-up.

But you’d be hard-pressed to notice the difference in normal driving, as the S has the same supple, controlled ride as more advanced models. The problem is that it doesn’t quite provide the precision and control you need at higher speed. Still, all cars get the XDS system, which helps stop the wheels from spinning as you accelerate out of a corner.

While this isn’t the cheapest Golf in the line-up – that honour goes to the 1.2-litre petrol three-door – it does feature what’s set to be the best-selling engine: VW’s new 104bhp 1.6-litre TDI diesel.

It develops a useful 250Nm of torque, although the powerband is quite narrow. Follow the ‘eco’ gear recommendations the car gives, and you’ll occasionally be caught out when driving up hills, and have to shift down to get the turbo back up to speed. But you can’t argue with the 74.3mpg economy or 99g/km emissions.