Which fast estate is the king of the load? 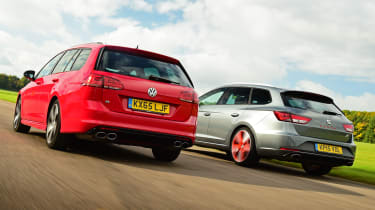 High-performance estate cars are all the rage these days. Not so long ago, go-faster load-carriers were the preserve of premium brands such as Audi, BMW and Mercedes. In recent years, though, mainstream makers have been getting in on the act and sending their workaday wagons to the gym for a muscular makeover.

The latest addition to the fray is the Golf R Estate, which takes the potent turbo and all-wheel-drive transmission of the hatch and wraps it in a more practical body. Boasting a heady 296bhp and a 605-litre boot, it promises to perfectly blend performance and practicality. However, this tempting combination doesn’t come cheap, starting at £33,585. Plus, unlike the hatch version of the R, the Estate is available only with the brand’s six-speed DSG twin-clutch gearbox.

Squaring up to the Golf is a closely related rapid rival: the SEAT Leon ST Cupra. We’re already big fans of the five-door, which scooped Hot Hatch honours in our 2015 New Car Awards, so an estate should be even more appealing. With the same MQB underpinnings as the Golf, a 276bhp 2.0-litre turbo, uprated suspension and a trick diff, the Leon will represent a stern test for the VW. Even more so when you consider its eye-catching £29,205 price. So, which of our hard-hitting estate cars is going to carry off the winner’s trophy in this encounter?

These cars are as much about practicality as performance, and the Golf takes first blood with its larger 605-litre boot. It extends its advantage with the seats folded. 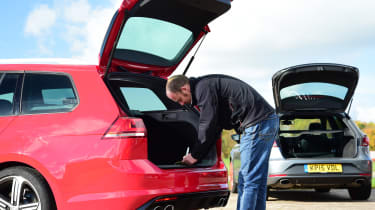 Yet the Leon hits back with its thoughtfully laid-out load bay that features remote release handles and an underfloor area for storing the load cover when it’s not in use.

Trip computers and built-in lap timers show that both models are designed to hit the track. 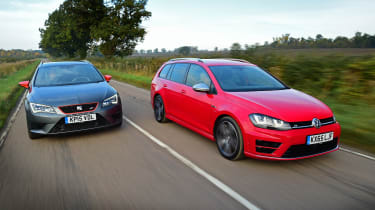 A six-speed DSG automatic is standard on the Golf R Estate, while the Leon gets a six-speed manual. Cupra buyers can add a twin-clutch set-up for £1,355 – and like the unit on the VW, it brings a launch control system for consistently fast starts. 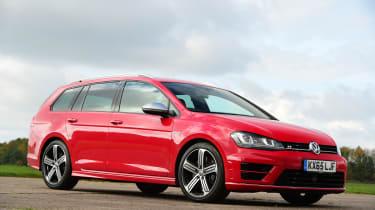 It’s expensive to buy and trails the Leon on kit, but the Golf is one of the ultimate all-rounders. It has huge performance, engaging handling, great all-weather composure and is very practical. Whether you’re commuting to work, on the school run, taking a family holiday, blasting down a slippery back road or attacking a track, the VW has it covered. Strong residuals offset the price premium, too. 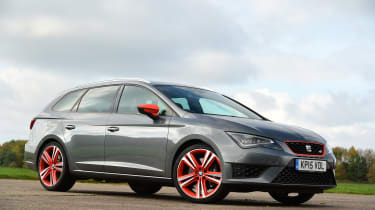 The Leon misses out on victory by the narrowest margin. On paper, it really appeals. It’s cheaper to buy, better equipped, nearly as fast and just as practical. It also looks great and rivals the Golf’s premium feel. Yet this test is as much about pace and driving fun as boot space and the bottom line, and the SEAT doesn’t have the VW’s dynamic polish and all-weather security. 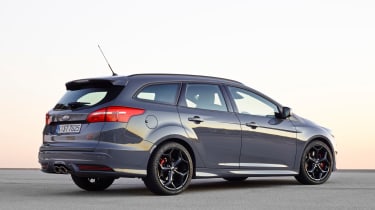 The tuned Focus ST closes on the SEAT for muscle, with the Mountune kit upping power by 24bhp, and it claims 0-62mph in six seconds. Handling isn’t as polished as Leon’s, but hairy-chested the Ford is full of character. 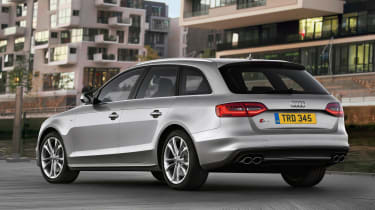 Upmarket Audi has even more power than Golf, while quattro all-wheel drive inspires confidence. Interior quality is impeccable, and at this budget you can buy a lightly used 2013 car with the desirable Black Edition upgrade.