It’s all very modern and hi-tech inside the ID.3, but some may find the controls take a bit of getting used to. 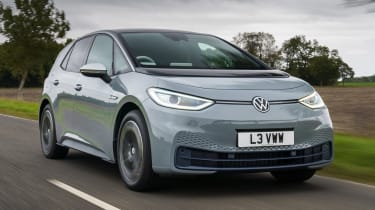 It’s all very minimalist inside the ID.3 cabin, with a modern, digital set-up that befits Volkswagen’s move towards an all-electric lineup. There are some cheaper-feeling plastics around the dash, although some funky-coloured trim inserts lift the mood.

The level of standard equipment is good with all cars including LED headlights, front and rear parking sensors, keyless start, climate control and heated front seats. Moving up the range brings a combination of equipment packs which add kit such as a panoramic sunroof, a rear-view camera and an upgraded audio system.

Customers can choose from six different metallic paint finishes, although all cars feature a contrasting black roof and boot lid. There is also the option to specify Exterior Style packs which add coloured accents across the roofline and C-pillar. 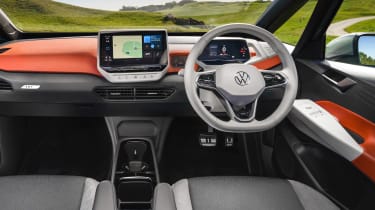 Everything in the ID.3 is touch-sensitive and, pretty much, controlled by the 10-inch touchscreen. There are positives and negatives to this; the panel is well positioned, the graphics are super-sharp and the set-up is very responsive, so even though there’s very little feedback, you don’t often hit the wrong function.

Apple CarPlay and Android Auto are standard, as well as built-in sat-nav and wireless smartphone charging - it’s a good system.

The fascia looks clean and slick, but the button-free design also means adjusting the climate control or audio is a little more fiddly than it needs to be. Still, the technology is way ahead of the Nissan Leaf, which feels last-generation in its approach now. The ID.3’s digital dash is also clean, clear and configurable; it feels like the most technologically advanced car in its class.