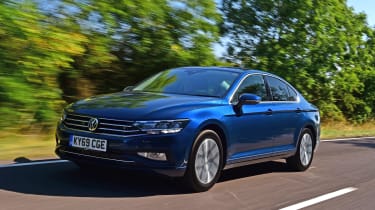 Starting with the 1.6 TDI with 7-speed DSG gearbox, this engine returns up to 51.4mpg in SE and SE Nav trims. Moving to the 2.0 TDI, the 150PS version has either six-speed manual or seven-speed DSG auto options, which return up to 60.1mpg and 56.5mpg, respectively, in SE guise. The R-Line trim, with its bigger wheels, sees these figures drop to 58.9mpg and 55.4mpg for the manual and auto.

The 2.0 TDI 190PS only comes in SEL and R-Line specs with the DSG box, where it manages up to 50.4mpg. At the top of the range, the biTDI diesel takes a big hit under the new WLTP test, with claimed economy of up to 39.8mpg, demonstrating the combined penalty of added performance, the DSG gearbox and 4Motion four-wheel drive.

Opting for petrol power will obviously result in a dip in efficiency. The 1.5-litre unit, in SE trim, manages 47.1mpg, while the 2.0-litre TSI engine delivers 37.7mpg.

Emissions range from 101-151g/km, with the 2.0 TDI performing best. We'd recommend this engine for its combined efficiency and added power. All diesel Passats come with a 13-litre AdBlue tank to help reduce emissions, and this well need to be refilled every 5,000 miles or so. 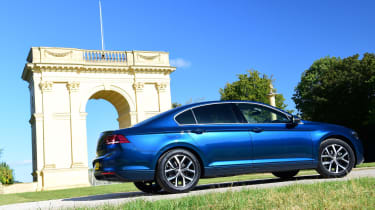 The GTE model is one of the cheapest versions to run, especially if you regularly undertake short journeys and can keep its 13kWh battery topped up. You can charge the battery using the car’s engine but it’s far more economical to plug in – using a standard 2.3kW charging cable, the battery can be filled in around five hours to give an all-electric range of around 30 miles. You can hold onto this charge until required, or use it in tandem with the car’s petrol engine like a traditional hybrid.

Volkswagen claims combined fuel economy of 217.9mpg for the GTE saloon and 196mpg for the estate but it’s worth noting that you’ll only see such figures if the battery is full and you spend a large proportion of your time travelling under electric power. CO2 emissions are quoted at 33 and 32g/km respectively – London Congestion Charge exemption and the lowest possible company car tax are the result.

For non-company car users, the 1.5 TSI Evo petrol model might be attractive. Fuel economy claims range from 40.9-47.1mpg, wth the larger wheels and DSG gearbox contributing to the lower figure. It's a similar story with emissions, although a spread from 117-121g/km isn't quite as severe.

The 1.6 TDI Passat has the lowest insurance groups, with the entry-level S coming in at group 15. More expensive SE Business and GT manage group 21 and 22, while the 1.5 TSI Evo is also in group 21. The 2.0 BiTDI model sits in group 28, reflecting its higher performance.

Retained values for the Passat are reasonable for a large, business-focused saloon: there's a spread of around 35-41 per cent in terms of retained value after 3 years/36,000 miles. If you want to see a bit more of a return on your cash, then the Passat Estate is slightly better, at 33-43 per cent.