The Polo is safe and comfortable rather than fun on the road, but the 1.0 TSI turbo petrol is a cracker 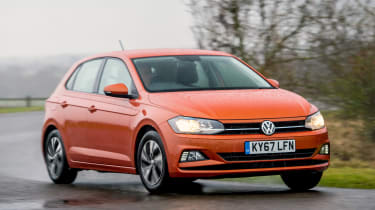 If the Ford Fiesta is seen as the fun choice in the supermini class, it’s certainly fair to hand the refinement and comfort titles to the Polo. It boasts a supple ride for a small car, edging out its competitors with Golf-like composure. Volkswagen’s engineers have coaxed a comfortable character out of the Polo compared to the SEAT Ibiza – a car that also uses the MQB A0 architecture.

Unsurprisingly, the Polo can still develop a rough edge on potholed roads or over nasty ridges in the tarmac, particularly with larger wheels fitted. But overall the ride quality is very high, and basic models on 14- or 15-inch wheels ride have excellent ride composure.

On A-roads and motorways, the Polo feels a much larger car than it actually is. Refined power units only assist in this regard, while low levels of wind and road noise are impressive, too.

The trade-off is that some rivals are more fun when the road begins to narrow and twist. The steering on regular Polos is sharp and direct enough, but devoid of feel. It’s the same deal with the pedal box and gearshift on manual models, revealing that the Polo is focused towards being as easy and as relaxing to drive as possible, rather than on providing outright fun. There is a balance between comfort and capability, but the bias is towards the former.

It does mean that the Polo works well in town, however. The good low speed ride paired to the direct, lightweight steering means that it shouldn’t be too terrible a place to be stuck in stop-start traffic. 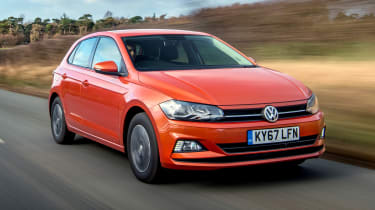 The 1.0-litre 79bhp option is sluggish, as suggested by its on-paper figures taking 15.4 seconds to hit 62mph from standstill, reaching a top speed of 106mph.

In almost every case, we’d recommend stumping up a bit more cash for one of the newer, more powerful 1.0-litre TSI units. In either 94bhp or 113bhp guise it delivers a dollop of refined performance, while the turbocharger means torque swells to 175Nm – there’s much more grunt to lean on and it’s easier to find when dropping down a gear to overtake.

We’d recommend leaving the seven-speed DSG automatic out of the equation, and stick with the slick and easy standard-fit manuals.