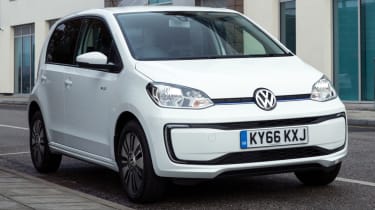 Volkswagen will reveal a freshly re-engineered e-up! city car with additional electric range at the Frankfurt Motor Show in September.

Speaking with Auto Express, sales and marketing boss Jurgen Stackmann explained the significance of the show for the Volkswagen brand, and in particular, the company's electric ambitions.

"Everything comes together - everything we have worked on for almost three years. New brand design, a very fresh approach to our style".

Volkswagen will introduce the production version of the Golf sized ID. hatchback at the Frankfurt show, while Stackmann also promised we'll get to see a "hint" of the car to follow it: the finished version of the ID. Crozz SUV. However, when asked about sub-C segment electric vehicles, the Volkswagen executive explained that the brand's immediate plan is to bring the e-up! electric city car back into the fold.

“The market below will be captured by a fabulous e-up! with an extended range that will be shown to you at Frankfurt as well," said Stackmann.

Volkswagen plans to produce a Polo sized electric supermini using the MEB platform, possibly priced from around £20,000, but battery costs mean it is unlikely to surface as a production model until 2023 at the earliest. As such the updated e-up! will have to occupy a sizable hole in Volkswagen's electric line-up, so  a decent upgrade over the 99 mile range of the old e-up! could be on the cards.

Rising costs and new emissions legislation could force VW into axing the regular up! city car and offer it as an electric vehicle only. A longer-range version of the e-up! supports this.

The future of the up! has been hanging in the balance for some time, but at the Geneva Motor Show back in March Stackmann revealed to Auto Express that new regulations will make it impossible to justify a business case for a new, conventionally powered city car.

“We are working to give a second life to the e-up! - it has big role to play in the next three to four year,” Stackmann told us. “In the long term the big question mark is if the legal system is pursuing and implementing the legal regulations they have just confirmed there is not a single business case for the cars the size of the up! – its just not possible.”

The up! is built alongside its sister vehicles, the SEAT Mii and Skoda Citigo, which will also get electric variants in the near future. But the project is said to have fallen short of VW’s own internal profit targets. Given the increased cost the project would pass on to SEAT and Skoda with VW’s withdrawal it’s unlikely that a successor to the Mii and Citigo will be developed, although that remains unconfirmed.

Stackmann added: “The cars are too small to carry high technology and a normal combustion engine is just impossible to reach the required CO2 levels. So in theory you’d have to sell an electric car to compensate for the problem of a [conventional] up! where the margin is already thin. We are focusing on the e-up! going forwards.”

However, the e-up! will not become part of VW’s new ID. range of electric vehicles, Stackman told us. As the car is not able to switch to the new MEB platform it will sit as VW’s entry point to EV ownership.

What do you think VW should do with the up!? Let us know in the comments...

Welcome to our Geneva Motor Show hub page, scroll down for all our Geneva content...
Best small cars to buy in 2020

Small cars come in all kinds of shapes, if not sizes. Here we highlight the best new small cars on sale
VW up! loses two NCAP stars 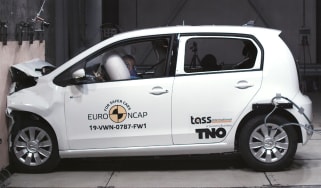