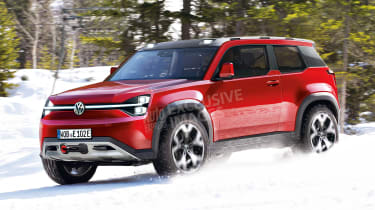 VW bosses revealed that the brand is mulling over entering the off-roader marketplace, going toe to toe with the likes of the Jeep Wrangler and the next Defender. But Volkswagen will stand out from the crowd by offering a pure-electric model. The SUV could arrive sooner than you'd think as VW's head of design Klaus Bischoff told us: “Maybe one of the next ID. family members is a more rugged [SUV], let’s see.”

American EV start-up Rivian has already revealed a large, seven-seat SUV featuring traditionally boxy proportions and a promise of off-road capability when it goes into production in 2020. But the proposed VW offering would be unapologetically a tough off-roader.

Volkswagen's head of strategy Michael Jost explained: “There are no producers in this sector yet, [building] a robust electric car that loves scratches and wears them as a badge of honour.” 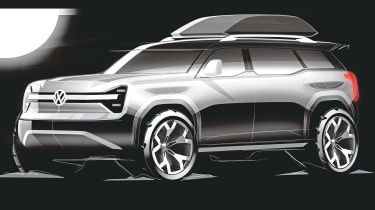 Jost told us he is championing the idea internally at the company, and he issued the details to our sister title Auto Bild to use the public reaction as leverage to convince the rest of the board.

The official sketch (above) is Jost’s weapon, previewing how a boxy, electric Volkswagen off-roader could look, while our exclusive main image shows the proposal in a more production-realistic way.

Jost stressed the utilitarian nature of the proposed SUV, emphasising a clean, simple, hard-wearing design using cheap and robust plastics, displays protected by waterproof and scratchproof covers and an interior that can be cleaned with a pressure washer.

The basis of the unnamed I.D. off-roader will be the VW Group’s new MEB platform for all-electric vehicles, and specifically, the version being lined up for use on a flagship, luxury, full-size I.D. SUV. But the electric off-roader could be offered in two sizes, just like the Land Rover Defender. A 4,500mm-long, short-wheelbase version would have three doors, while a five-door, seven-seat variant that’s 4,850mm in length would sit between the Tiguan Allspace and the Touareg.

As with all I.D. models, VW could offer more interior space than comparable combustion-engined rivals, owing to the packaging of the electric motors and batteries.

It’s far too early for detailed technical specifications and the brand has yet to reveal what the electric range of the largest version of MEB actually is, but 600km (373 miles) is the number most commonly associated with the maximum range of the platform.

A proposed production date has not been announced. The project is still embryonic, and with a fleet of confirmed I.D. models already in the pipeline from the end of 2019 onwards, it wouldn’t arrive until 2021 at the earliest.