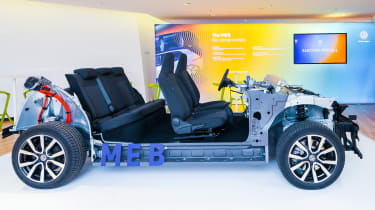 Volkswagen has revealed the first details on the MEB platform technology that will underpin its forthcoming range of I.D. electric cars – and announced aggressive sales targets along with how some of its €6 billion (£5.4 billion) investment in EVs will be spent.

The first I.D. product is expected to be a five-door hatchback and it should go on sale before the end of 2019. VW has confirmed that it will be built at its Zwickau factory, and stated that it is investing €1.2 billion (£1.1 billion) in the plant. The company says that by the end of 2020 it expects to be selling 150,000 electrified vehicles per annum, with 100,000 of those belonging to the I.D range. While the remainder of EV sales will come from existing cars such as the e-up! and e-Golf. The German manufacturer is also targeting a 10-fold growth in I.D. sales, meaning it intends to sell one million I.D. vehicles per year by 2025. 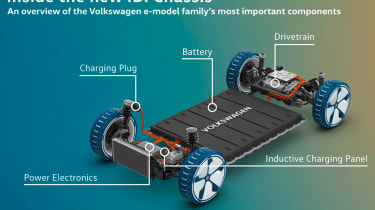 VW says that across the wider group – so including SEAT, Audi and Skoda – it expects 27 pure-electric MEB models to be on sale by the end of 2022. And that in total, 10 million vehicles will be based on the first wave of the MEB platform, which has been conceived from the ground up to accommodate batteries and electric motors, with no compromise for combustion-engined variants.

The company has also detailed how other production sites in Germany are being adapted for MEB. Its battery systems factory in Braunschweig will expand to facilitate half a million battery packs per year, while the facilities at Salzgitter (rotors) and Kassel (electric motors) will also receive fresh investment. VW says it plans to spend €1.3 billion (£1.2 billion) across these three sites.

The first I.D. hatchback is expected to be available for roughly the same price as a well-specced diesel Golf – so it should start from around £25,000 after the UK government plug-in grant is applied. As Auto Express revealed last year, the car will make use of the MEB’s packaging advantages to offer an extremely long wheelbase that gives the interior space of a Passat in a vehicle that’s roughly the same length as the current Golf. Every vehicle based on the new platform will have fast charging as standard – enough, the firm claims, to take the battery from empty to 80 per cent charge in around half an hour.

VW’s Board Member for E-Mobility, Thomas Ulbrich, said MEB will be as significant a step in the brand’s development as “the transition from Beetle to Golf”. He added, “The MEB is the economic and technological backbone of the electric car for all. The MEB models will range from compact cars to the lifestyle Bulli (a pure-electric tribute to the classic VW camper van). That is something quite unique.”

VW has revealed that a prototype production version of the car is currently under preparation in its ‘Pilot Hall’ in Wolfsburg, and that it will soon begin tests at the firm’s top-secret Ehra-Lessien proving ground in eastern Germany. The car should be revealed in full in the final quarter of 2019, although UK sales aren’t likely until early 2020.

Looking for an electric car? Then take a read of the best EVs on sale.